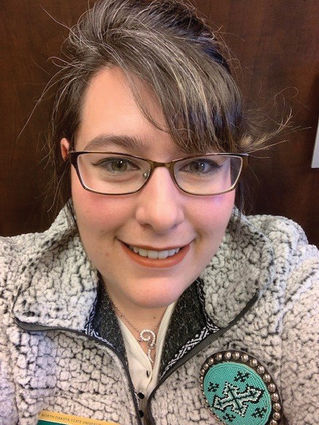 So far Leo has enjoyed her time in McKenzie County. She said, "I really enjoyed my job thus far! I am still in the learning curve but am quickly picking up important information. It has been a wonderful experience, and I hope to continue this type of work for many years to come!"

Leo is fresh off the press, so to speak, so she has plenty to learn. Leo added, "In the short time I have been here, I have seen enough to try and help boost some of our programs that are weak or maybe start up committees for some of the larger projects that require more attention and care. I plan to attend as many trainings as possible to learn as much as I can and spread the knowledge wealth to my county residents!"

Leo recently graduated with a Bachelor of Science degree in December 2018 at Montana State University in Bozeman, Montana. Leo said, "I first attended college at Northwest College located in Powell, Wyoming. I wasn't quite sure what I wanted to do, so I pursued two separate AAS degrees from Powell. My first was in Equine Riding and Training, and my second was in Graphic Design. These two Associates degrees allowed me to explore multiple different work fields. I Graduated Powell in 2012 and went on an International Foreign Youth Exchange trip," stated Leo. A former 4-H leader presented this opportunity to her. Leo accepted the position as a representative for MT and ended up on an agricultural tour through host families in Norway and Germany. "I was abroad for six months before returning stateside. After a few years of wandering through jobs, I decided to go back to school, and I received a Bachelor of Science degree in Animal Science in Bozeman."

After Leo graduated from MSU, she applied for multiple jobs throughout MT and ND. "I figured wherever the best interview happened was where I would end up. When I showed up for the interview here, I felt right at home! A party of very jovial and inviting individuals greeted me at the door! The interview, even though formal, felt like home. I interviewed for one other position in ND, and I decided that Watford City was the place to be," said Leo.

Loe grew up in a small town located in the far southwest corner of Montana, nestled in the Madison Valley called Ennis, Montana. "My family and I moved around quite a bit when I was younger but finally settled in Ennis. Ennis is cupped by two mountain ranges which make for breathtaking scenery but can also be very dangerous; in the winter months especially," said Leo. Here she helped her family raise lambs, cows, horses, pigs, chickens, and rabbits. "We had a family weed spraying business, and we traded much of that work to lease a property to raise livestock. I raised club lambs with my mom, and we also had other livestock. My brother raised a small group of cows that he showed, and we also had pigs, horses, dogs, chickens, and Mini Lops and Standard Rex Rabbits. I was the top club lamb ram producer in the state of MT for two years running and also the top club lamb ewe producer in the state of MT for three years running," explained Leo.

Leo has participated in 4-H for 13 years, "It was a very strong program within our county, I started as a Clover-bud and continued participating in as many projects as possible," said Leo. Throughout her time in 4-H, she has been a 4-H Ambassador, volunteer project leader, and a club leader for the very same club she was in as a 4-H youth.

"Extension was always something I admired, and in my county, I helped our agents as much as possible. I would help give demonstrations on multiple topics as well as assisting with fair activities," said Leo. She explained that during her time in 4-H, extension agents promoted her participation with extension as often as possible.

Leo explained that she was not interested in being an extension agent at first, but she admired all the hard work and time they put into 4-H. "I wasn't sure that was something I wanted to be responsible for! I now know that it was the right decision for me," said Leo.

Leo hopes to bring new ideas, different perspectives, and a refreshed view of what the future may hold for McKenzie County and its surrounding neighbors. She has already planned events for McKenzie County. For example, she is organizing a Noxious Weed Information Day in September, where she will be collaborating with the Williston Research Extension Center and other constituents within the state. Leo explained, "I am excited for this because I think it has value for my producers to be educated further on the new processes and new upcoming weeds that present problems in other states. We don't want those weeds here, and if we can prevent them from coming or at least are prepared to combat them, then we will have all the information we need! Education is important to me, and I want to share that wealth of knowledge as much as possible."