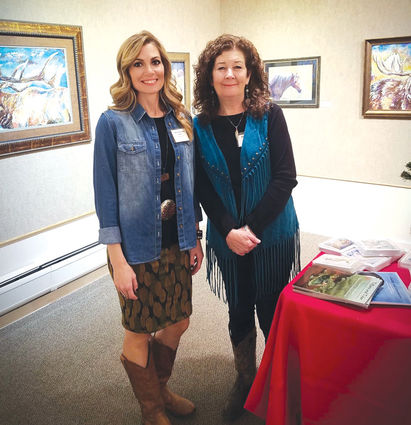 Local artists Trish Stevenson, right, and Afton Ray, left, gathered a treasure trove of local and regional artists to the "Confluence of Creativity" at the MonDak Heritage Center in Sidney. The show, which runs through July 27, features about 14 different artists including painters, a book illustrator, a glass artist and more, plus musical acts.

The "Confluence of Creativity Art Exhibit" is the brainchild of two local artists, Afton Ray-Rossol of Sidney, and Trish Stevenson of Savage, Montana. Whenever the two of them get together, anything to do with art is naturally the main topic and it was during one of these discussions that they realized there are quite a number of talented creatives in the local region of the MonDak area – both artists and musicians, whose work reflects our unique neck of the woods. The two artists approached the MonDak Heritage Center and it was agreed that the museum would host the "Confluence of Creativity" which is on display now through July 27, 2019.

Growing up in Sidney, Ray-Rossol's art had strong support from her family and won her many awards. She considers her talent a gift that comes naturally. She received a full scholarship and studied art at DCC in Glendive and has exhibited her work throughout the Montana-Dakota region. Her favorite award was received in 2013 when George Strait personally chose her design for a poster that promoted 60 Number One hits for his 60th birthday. Ray-Rossol, her husband and daughter are an avid outdoors family and those outings provide endless inspiration for her artwork. She operates The GalleRay Art & Frame Studio in Sidney where she paints, conducts workshops and does custom framing. Find her "Bold West" original art and prints on Facebook and Instagram.

Stevenson grew up in a rural area west of Denver and attended the Colorado Institute of Art, which included a study trip to Europe. She has made Montana her home for over 20 years. "I am surrounded by my inspiration, living in the ranching country of eastern Montana with horses, cattle, cowgirls and cowboys," she explains. Her pastels and oil paintings have been featured in Western Horseman Magazine, and exhibited at Rockwell Museum in New York, International Museum of the Horse, the Out West Art show in Great Falls and North Dakota Cowboy Hall of Fame. You can see more of her artwork on her website: http://www.trishstevenson.com, Facebook and Instagram.

Jeanne Bowman is an illustrator of picture books. She recently illustrated The Selfish Giant by Oscar Wilde for Familius Publishing. She was born in Tennessee, but has lived in Colorado, New Mexico and Montana, jumping back and forth between them. She works in watercolor and cut paper. Jeanne drew inspiration from comparing the different landscapes she has resided in the north vs. the south, and what it means to belong to a certain place. You can see more of her work at jeannebowmanillustrates.com. 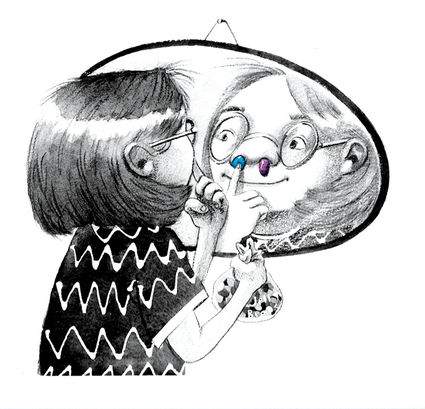 Paige grew up in Colorado and has bounced from state to state throughout her life. She graduated from Montana State University Billings in 2009, having decided to change careers to an IT professional. But artwork has always been her passion and now she is dedicating her time to perfecting her craft. She works with cast and fused glass, found objects and beads. She is inspired by the natural world and has found interesting subjects in the animals and people living in the MonDak Area. She has exhibited at the Yellowstone Art Museum, Harwood Art Gallery, Glass Hole Art Gallery as well as at Albuquerque Summerfest and Bubonicon. You can find more of her work at crowscachearts.com.