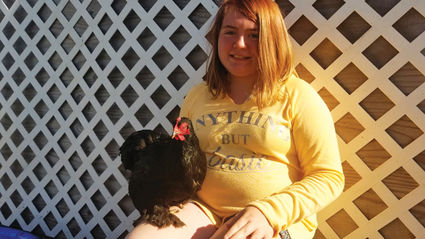 Cayla and her hen Jasmine, which she received from former 4-H member Kyle Topp after her flock was killed by a stray dog only a few weeks before the fair.

Sidney 4-H member Cayla Hanson lost almost her entire flock of chickens a few weeks ago, only a short time before the Richland County Fair & Rodeo. Hanson will be able to show in the poultry category this year thanks to help from a few friends.

Hanson began raising chickens primarily for the eggs, but fell in love with poultry-raising, and started showing last year. "She's handled her chickens since they were born. They were basically trained like dogs," said Cayla's mother, Kimberly. Showing poultry requires in-depth training and handling of the show birds. "You have to show them different ways," Kimberly explained. "It's a lot in how you hold your chicken, how you interact and if you can control your chicken." Cayla had trained her flock so well she entered into poultry showmanship, and last year won both a blue and a red ribbon.

The flock, however, was just about wiped out by a stray dog when the family was away. "When we got home, all of our birds except one duck were gone. There were tons of feathers but no bodies. Were actually amazed we didn't lose our sheep and goat in the process." Kimberly said. The family suspects it was a stray dog, as "we found tracks, but they were no coyote or fox." Cayla was devastated by the loss. 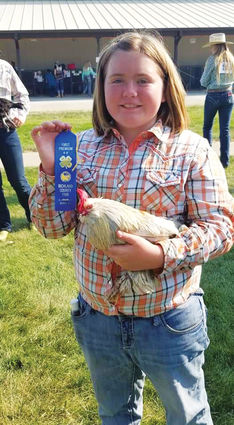 Cayla brought home both a blue and a red ribbon in poultry showmanship at the fair last year, her first year in showmanship.

Shortly afterward, Cayla was given chickens from both poultry leader Linda Simonson and former 4-H member Kyle Topp. "I remember when my neighbors' dogs came and killed some of my chickens, I can't imagine losing your whole flock," Topp explained. "I just wanted her to have a good project for fair. I'm sure she'll give them all the love in the world."

Upon receiving her new chickens, "she didn't leave the coop for a week," Kimberly said. One of the hens she received from Topp "sunk into her arms and never left. That hen listens to whatever she has her do. Mentally and physically, she is ready because of this hen, they just connected." Cayla also received a young bantee rooster, which will be a companion to the hen she'll show this year.

Despite her loss late in the season, Cayla will show for her second year, with many thanks to both Simonson and Topp. Cayla lives outside Sidney, and will attend Sidney Middle School in the fall.