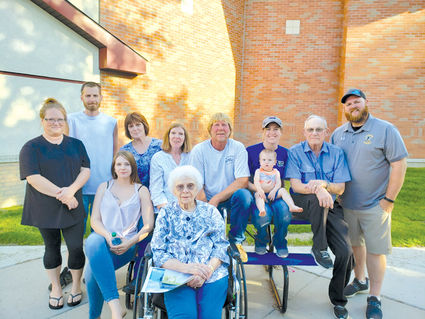 In 1917, the U.S. had entered WWI and the influenza epidemic started. Woodrow Wilson was president, a first class postage stamp cost .02, the famous Uncle Sam "I Want You" posters made their debut, and the first Pulitzer Prizes were awarded. The Chicago White Sox beat the NY Giants in the World Series, Omar Khayyam won the Kentucky Derby and the Seattle Metropolitans won the Stanley Cup. The International Red Cross was awarded the Nobel Peace Prize.

In Leonard, ND Roselyn Lueck was born. She married, then she and her husband Ewald moved to a farm near Sidney, MT where she raised two daughters, Carol (Bieber) and Marlene, both deceased, and helped out in every way on the farm. She was also very active in Trinity and St. John's Lutheran Churches.

Her granddaughter Debbie Moore said she was, and still is, a wonderful grandma. Lueck doesn't have any special secret to her longevity, simply saying that she has been very fortunate and blessed. After living in the Lodge at Lone Tree Creek for several years, Lueck recently moved into SHC Extended Care

Family and friends gathered there Wednesday, July 24 to celebrate.