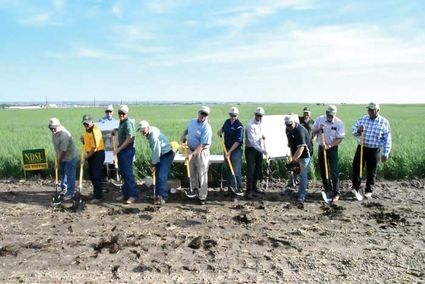 The NDSU Williston Research Extension Center's (WREC) employees and farmers in the MonDak trade area are excited about the good news the WREC received in late April. This good news was that the WREC received $750,000 in funding from the North Dakota State Legislature to build a brand new seed cleaning facility. This new facility will benefit not only the WREC and its employees but also MonDak area growers who purchase seeds from the WREC on a regular basis.

Kyle Dragseth, Farm Manager at the WREC, explained that the funding was finally made possible by the progressiveness of Tom Wheeler, the Advisory Board President, and Jerry Bergman, the WREC Director, "They have worked long and hard to get this vision to a near reality," said Dragseth.

In order to obtain the funding, there were many procedures the WREC had to go through. Dragseth explained, "There have been many hoops to jump through in an attempt to raise funds for a new facility: first was getting permission from the Board of Higher Education, NDSU, and the State Legislators." Since then, a campaign has been underway to raise the necessary funds for Williston's seed-cleaning facility.

Jerry Bergman, Director of the WREC, stated, "We are still working on fundraising and thus far have fundraised just over 50% of the money needed to make this happen." Although the WREC still has fundraising to do, $750,000 will go a long way toward the WREC's capital campaign goal of $2.25 million.

The WREC is hoping to be done with fundraising by December 2019, and if things go as planned, construction for the new facility will possibly begin in the spring of 2020. "We're going to move the current facility to another spot on the fields here, and build the new seed cleaning plant where the old one was," added Dragseth.

The research center has been trying for many years to update its current seed cleaning facility, but with lack of funding, it just wasn't possible. The WREC's existing facility was built in 1956, making it the oldest one out of all the Research Centers in the state of North Dakota.

As the WREC's Farm Manager, Dragseth conducts and oversees all farming aspects of dryland research projects, farm operations, and seed production, equipment, station care, and maintenance. Dragseth has worked at the WREC for 23 years full time, and four years part-time, so he has had many years of experience with cleaning seed at the WREC's current facility.

Dragseth explained when cleaning seed at the current facility; it is challenging to keep an eye on the seeds when they are on five different levels. "It isn't the best of working conditions either; it contains poor lighting, ladders, and poor dust control. It's also hard to find the parts to keep the current plant up and running."

WREC's current seed cleaning facility only produces 35 bushels an hour, which makes it challenging to keep up with regional demand. The new facility is expected to clean seed almost six times faster than that - approximately 200 bushels an hour. It will also be all on one level so Dragseth will be able to do several projects at once. "We will be able to more than triple our cleaning capacity and guarantee purity of seed varieties. We will also be able to increase the number of crops that we can grow for seed production, to give the seedsmen who acquire the seed from us more options and availability. That is the goal here to produce the best public seed varieties that we can to make the producers in the MonDak region more profitable. The good thing about public seed varieties is you can replant your seed production back year after year on your own operation," added Dragseth.

When Dragseth was asked what part of the new facility he was most excited about, he explained, "The seed plant being equipped with an optical sorter with infrared lighting designed for the most complex color sorting." This sorter will deliver seed with the highest genetic purity of new and higher-yielding/value-added crop varieties for MonDak area growers. The new facility will enable pure seed production and guarantee complete separation of crops, with all the seed cleaning equipment designed for simplicity of clean-out and ease of accessibility.

This new facility will benefit WREC and its seed consumers in a number of ways. It will help the WREC become more profitable and enable consumers' access to more crops and different varieties of seeds from public breeding programs to include North Dakota, South Dakota, Montana, Washington, Minnesota, and Nebraska.

If you are interested in donating money to the WREC, checks can be made out to the NDSU Foundation or WREC and mailed to 14120 Highway 2, Williston, ND 58801. The contribution will be tax-deductible, and donors that donate $100 or more will be recognized on the Hall of Honor, located in the Ernie French Center. For more information, you can call the WREC at 701-774-4315.