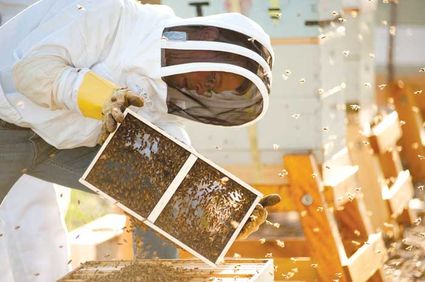 BOZEMAN – A Montana State University doctoral student has received a $100,000 fellowship from a honey bee-focused nonprofit to advance his work studying antiviral defense mechanisms in bees.

Alex McMenamin is a Ph.D. candidate in the Molecular Biosciences Program, partnered with MSU's Microbiology and Immunology Department in the colleges of Agriculture and Letters and Science. McMenamin has been working with adviser Michelle Flenniken, an assistant professor in the Plant Sciences and Plant Pathology Department and co-director of MSU's Pollinator Health Center, since 2015.

McMenamin was one of five finalists and two award winners for the Project Apis m. Costco Scholar Fellowship, given every three years to researchers who show promise as "tomorrow's bee scientists." The nonprofit gets its name from Apis mellifera, the scientific name for honey bees. It was founded by beekeepers in 2006 and supports honey bee research, forage for pollinator populations and best management practices for beekeepers nationwide. The fellowship will provide funding for the next two years of McMenamin's research, which focuses on key proteins involved in honey bee antiviral defense, including a class of proteins called "heat shock proteins."

"Heat shock proteins are special proteins that help maintain the proper structure of other proteins," McMenamin said. "These proteins are also involved in a variety of ways in responding to other stresses, including virus infection."

Flenniken said that while researchers are interested in the impact of viruses on overall honey bee colony health, McMenamin's laboratory experiments help reduce the number of variables to consider and focuses on individual bees' antiviral responses.

"Alex's work focuses on investigating the impact of viruses at the individual bee and the cellular levels, so we can determine the mechanisms that bees use to defend themselves against viruses," she said.

For McMenamin, who received a bachelor's degree in immunology and infectious disease and a master's in entomology from Pennsylvania State University, coming to MSU allowed the opportunity to collaborate with one of the best researchers in the field of honey bee virology. In 2011, Flenniken was part of a team that discovered a previously unknown bee virus, Lake Sinai Virus 2 (LSV2). McMenamin also utilizes that virus in his studies.

"That virus is very important because even though LSV2 is extremely prevalent and globally distributed we're not sure how it affects honey bee health," he said. "But, in some studies, LSV2 has been associated with poor colony health."

McMenamin initially intended to pursue medical school when he began his studies at Penn State, but early in his undergraduate studies he took an entomology course and fell in love with studying honey bees. He became an undergraduate research assistant and focused his research on the health and behavior of Kenyan honey bees.

When he came to MSU, McMenamin also worked in the Wiedenheft Lab and Young Lab as part of the Molecular Biosciences Program's rotations for first-year students. Research in the Wiedenheft Lab focuses on bacterial immune systems and the cellular mechanisms that drive them. In the Young Lab, which focuses on viruses and human microbial processes, McMenamin conducted research on viruses native to some of Yellowstone National Park's hot springs.

Those rotations are a unique element of the MBS program, which allows for an interdisciplinary approach to doctoral studies by partnering with departments and research centers around the university. McMenamin credits the ready access to such diverse resources as one of the defining elements of his time at MSU.

"In addition to being in the lab of an expert, MSU is a small school with a lot of resources I wouldn't have had access to otherwise," he said. "It's easy to make friends and colleagues across campus, and I've appreciated that a lot."