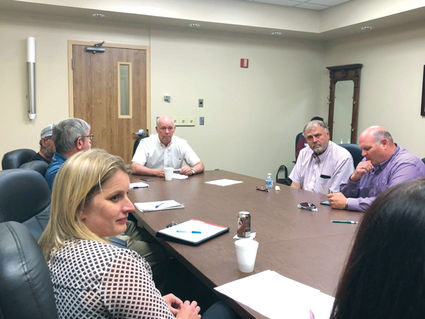 During a meeting held at Sidney Health Center on Thursday, U.S. Rep. Greg Gianforte, R-Mont., met with area leaders to discuss issues the city and county are facing.

Katie Dasinger with Richland Economic Development brought up the issue of investing in rural communities. With both Shopkos closing in Sidney, shopping local was discussed. Gianforte said we need to look at innovative ways to get people to stay local or come back if they've moved from the area. Dasinger said the Sidney Young Professionals have been discussing this issue at length. Richland Economic Development worked with the Chamber on a shopping options survey. The survey asked questions such as how often they shop here, how often they shop online, what items are difficult to find here and more.

Commissioner Loren Young asked about funding for the rural water project. In February of 2018, Gianforte introduced the Clean Water for Rural Communities Act. In a press release from 2018, Gianforte said, "Unfortunately, not all Montanans have access to a reliable water supply. The Clean Water for Rural Communities Act will better ensure more than 20,000 Montanans in our rural communities have a steady supply of water."

Mayor Rick Norby said one of his concerns is providing Sidney residents with good, clean water. "I'm a big supporter. We did get some more secure funding for the water projects," Gianforte said. While he was unsure of the amount, he did say that it was something he would look into.

Jason Brothen, the general manager for LYREC, said power consumption, not just in rural areas, needed to be looked at. He questioned when the generating facilities would be updated.

Uintah land surveyor Troy Jensen brought up the Keystone pipeline. "We need to get fuel to market and the pipeline is how we do it," Gianforte said. Saying that he is a big supporter of the pipeline, Gianforte said there are continuous court obstacles that need to be overcome for the project.

Gianforte went on to say that one of the issues he feels should be addressed is the drug epidemic.

"If people knew how bad the drug epidemic is, I think they'd be surprised," Norby said.

With the rise in narcotics and opioid misuse, it's a growing concern nationwide and Montana. The methamphetamine problem in the area was also discussed. While there are treatment courts in the area, officials agreed there is more that could be done.