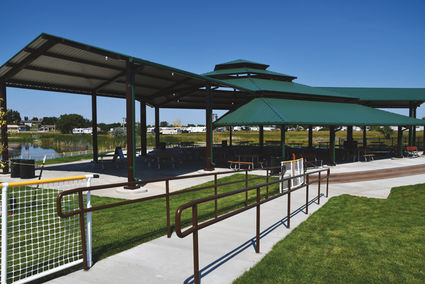 The Kent Pelton Nature Park Grand Opening will take place on Thursday, August 15th. The free event will be held in conjunction with the Watford City Farmers Market.

The Watford City nature park has been under construction for the past four years. The park went under went a $670,000 renovation that included a pond fountain in the existing fishing pond, an accessible fishing area, three 20x20 park shelters, concession and restroom building, a ten-foot walking path, pedestrian lighting with electrical outlets, new electrical hookups for RVs and events, and lawn space for events. The new park offers more recreational opportunity with the addition of a deck and a steel pavilion overlooking the pond.

One of the goals of the park was to plant many different species of trees around the park and to include a separate concrete walking path that will connect to the path that leads to Bolken Park.

The park was named after Kent Pelton who started the expansion of the park before he passed away in December of 2015. Pelton was an agriculture teacher at Watford City High School for many years. He also served on the Watford City Park Board for eight years. In 2000 he was elected to the City Council and served there for six years until he was elected Mayor in 2006.

The Kent Pelton Nature Park will serve as an outdoor space that is safe and enjoyable for the community to use throughout the year. Everyone is encouraged to come out and enjoy the grand opening of the park.