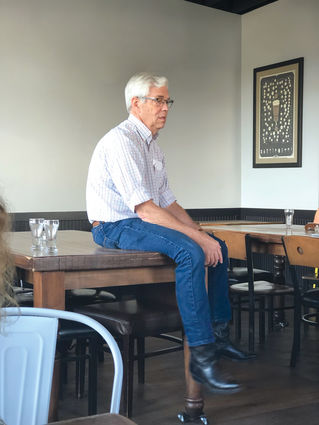 Democrat Mike Cooney paid a visit to Sidney Saturday for a meet and greet at the Meadowlark with the public.

"As much as you want to hear from me, I'm here to learn from you," Cooney said.

Cooney explained that he's spent most of his life in public service. He dropped out of college when he was elected into state legislature. He then went to work for Senator Max Baucus and moved to D.C. Following that he moved to Helena where he spent 12 years as Secretary of State.

Cooney spent six years working for a non-profit called Healthy Mothers, Healthy Babies where they assisted pregnant women throughout their pregnancy to help make sure they were prepared for when the baby arrived.

He was elected to the State Senate where he served two terms and then served as President of Senate. He now serves as Lieutenant Governor under Governor Bullock.

"We want to hand off a better Montana to the next generation," Cooney said.

He said that what he hears most from the public is that people want to see a better economy and that's what he strives for. Cooney said people also tell him they want better access to health care, better education, access to public land and for something to be done about the drug problem our state is facing.

"We're lucky to have a great education system in Montana," Cooney said.

He went on to talk about access to public land.

"We want clean air, clean water and the right to hunting and fishing," Cooney said.

He said that we have great capabilities when it comes to wind energy, solar energy and hydro energy. With the change from coal energy to alternative methods, he said we have to change with the market and be prepared to move into new areas.

Students from the high school were encouraged to attend the meet and greet and were even offered extra credit for attending. One of the students asked what Cooney felt was the most important part of being governor.

"What leadership style you have and how you choose to use your leadership," Cooney said. "I don't have all the answers, but I listen."

He went on to discuss the cost of education and the need for lowering the cost. He informed attendees of apprenticeship opportunities and how they can be utilized versus spending a large sum on going to college.

While the drug epidemic is a problem across the U.S., Cooney said they are looking at Canada and the way they deal with the issue.

"It is a problem," Cooney said. "We don't want opioids flowing freely."

He feels the first step to solving the issue is to start with doctors. While he pointed out that there are people that are in need of opioids, he talked about trying to find other options first before going to an opioid and increasing treatment.