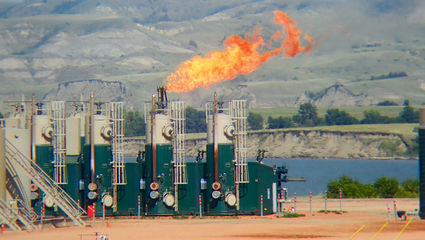 Although the men were voracious predators, the impact of the expedition was negligible compared to the predator that followed in their wake: commerce. In exchange for trade goods, Whites and Indians systematically trapped every beaver, muskrat, and other marketable fur they could obtain. Meat was often discarded as a by-product in the quest for furs.

There was also a market for buffalo hides, primarily used as belts for machinery in the emerging industrial revolution.  Buffalo meat, however, had zero value since there was no practical means to transport it to market. Whole bison were left to rot on the prairie, killed only for their hides.

Railroads brought more commerce. Railroad companies encouraged passengers to shoot bison to prevent their blocking the tracks. They advertised bison shooting as a sport, much as people still shoot ground squirrels and prairie dogs for entertainment.

Cattlemen sought to eliminate bison to make room for livestock, and the U.S. Army favored culling bison to eliminate the primary food supply of the Indians, forcing them onto reservations. Millions of bison were left to rot on the prairie, their bleached bones later collected and ground up for sale as fertilizer.

As a beneficiary of the market economy, I am keenly aware that commerce provides unprecedented innovation and material wealth. We are privileged to choose our own paths in life, even having the opportunity to paddle the river.

As seen from the water, the roads and pads are not visible, so the oil wells seem to sprout from the land itself. Like mushrooms popping out of the soil, there are oil rigs everywhere, lining the riverbank, sprouting from hay fields and badlands, or silhouetted on the rim against the sky. There are traditional oil rigs and newer square columns that look eerily suggestive of Easter Island statues, the classic symbol of a culture that overshot its resource base and collapsed.

At nearly every oil pad is a flame, burning off natural gas to separate it from the oil. It isn't that the gas isn't useful, but like tens of millions of bison carcasses on the prairie, the resource has zero value in the absence of any infrastructure to bring it to market.

Saudi Arabia previously torched enough natural gas to supply the world for 400 years because they lacked the means to bring it to market. On a smaller scale, North Dakota flares off enough natural gas to heat tens of millions of homes. Although western North Dakota is rural, the light of so many flares makes the western part of the state as bright as Chicago at night when viewed from space. Wherever we paddle, wherever we hike, we are encircled by oil rigs and gas flares, some flames reaching 50 to 100 feet in height and audible from three miles away, like a passing jet engine that never actually goes anywhere.

With all the rain this year, the land remains as green as spring. The random intermingling of prairie, hills, hayfields, oil wells, and gas flares creates a peculiar illusion, like some kind of video game. Where else would you see fire randomly spouting from the hills, but in a video game full of sorcerers and magic?

Gas pipelines are slowly being installed to capture natural gas instead of wasting it, yet no oil company is going to cease operations and stop flaring in the meantime.

As a young man, I was drawn to the work of Amory Lovins, once described as the "top five of the top ten energy experts in the world." Lovins demonstrated that we could avoid global warming at a net profit by investing in conservation measures for less than it cost to produce energy. Market forces can be harnessed to make the world a better place, a model I have subscribed to through my personal life and career. Applying a conservation ethic is one of the main reasons I can afford to follow my dreams in life, including spending six months paddling the Missouri. 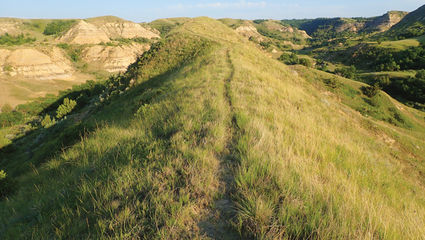 Thus it is a shock to witness such flagrant resource waste, emphasizing the fundamental unsolved problem of the market economy, that the future has no value. There is no incentive to conserve resources for the next generation or even ensure that there is a next generation. Like the statues of Easter Island, the oil rigs overlooking the river could easily become monuments to yet another culture that overshot its resource base and collapsed.

Thomas J. Elpel is president of the Jefferson River Chapter of the Lewis and Clark Trail Heritage Foundation and the author of Green Prosperity: Quit Your Job, Live Your Dreams. Go to http://www.Elpel.info to learn more about the Missouri River trip, Tom's books, and the expedition fundraiser for the Jefferson River Canoe Trail.