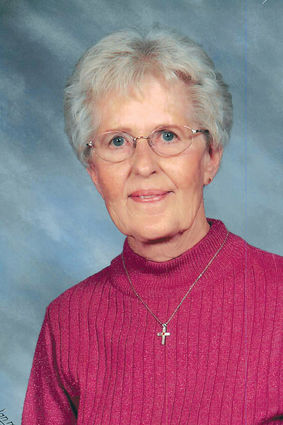 Our loved and cherished mother and granny went to be with the Lord on June 22, 2019. Lillian Frieda (Propp) Riedel was born on July 14, 1934 in Worden, MT to Paul and Mary (Walters) Propp. She was the fourth of five children. At the age of four the family moved to the Fairview area. Lillian went to school in Fairview and graduated from Fairview High in May of 1952. On November 2, 1952 she married Robert Victor Riedel whom she had been dating since 7th grade. They bought a farm near Fairview and this is where she was when she passed. It was a wish she had and we were so happy it was able to be granted to her. In 1954, Vicki Lynn was born, 1956 Cheryl Kay and in 1969 Keith Alan. Mom & Dad were both very proud of their children... Mom with the iron fist and Dad the one that always shortened our 'being grounded' time. So to that we'd say we had the best of both worlds.

She loved living on a farm and was a very hard worker. We had milk cows, chickens, pigs and lambs which Mom took care of. She was also in charge of yard work and, of course, all the cooking/baking....which, by the way, she was wonderful at. Vicki and Cheryl were blessed with cream of wheat or pancakes or anything hot after we were done irrigating in the early summer mornings. And then she let us go back to bed for a while to warm up. We were also treated to things like caramel rolls or chocolate chip cookies when getting off the bus in the winter time. She taught both of us a lot about canning, cooking and baking. Oh, and let's not forget CLEANING. Anyone that knew Mom knew you could eat off her kitchen floor.

Mom and Dad were wonderful parents to grow up with. We got to go snowmobiling, ice-skating, lots of camping and boating with a few vacations here and there. They also played Tripoli, Whist and different board games. Boating was Mom's least favorite of all of these. Dad loved to give us a thrill by turning sharp and trying to get the water up as close to the edge of the boat as he could. Dad – huge grin, Mom – frown. Her world was turned upside down and her heart was hugely broken when Victor passed away in 1972.

Mom decided to try the working world as we all learned to live without Dad. The jobs she had over the years were at Sidney Livestock, Williston Livestock, Modern Lady, Judy's Catering, scalehouse person for weighing beet trucks for Holly Sugar. She also drove beet truck for the Riedel family but that started with marrying Dad.

Mom spent the last of her years working in her flowerbeds, helping in the garden, mowing her lawn and doing everything most people have to do for the upkeep of a farmyard. She was very intelligent in many things. The most we have to marvel about is, as we have been running into things lately, she was a Mrs. Fix-it in some of the most unique ways. We have found ourselves saying many times since she passed....only Mom/Granny would have fixed it that way!!! She was Keith's right-hand caretaker and spent many hours driving and sitting in the hospitals with him. We loved watching the pouring out of her love for her son.

Burial will be at a later date at Fairview Cemetery, Fairview, ND.