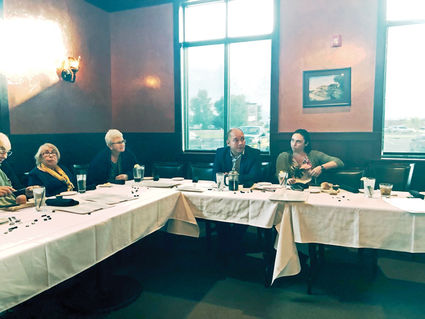 Casey Schreiner recently visited Sidney during his campaign for governor, meeting with the public at the Rod Iron.

Schreiner used to be a high school biology teacher. During his time teaching, he took a group of students to Helena on a class trip. During the trip one of his students suggested that he run for legislature, a choice that he took into consideration and said "changed his life."

"Running for governor is something that everyday Montanans should be able to do," Schreiner said.

Among the issues he finds most important to focus on, Schreiner talked about education and health care. With a father who got sick due to the high cost of insulin, Schreiner is invested in fixing the health care system.

"We need to have better resources throughout the state," Schreiner said.

He went on to talk about mental health and how it needs to be addressed and better handled in the state.

"Health care is a big priority, and education is important too," Schreiner said.

With two sons who are on the Autism spectrum, his priorities go hand in hand. He talked about how privileged people are who don't live in rural Montana and the resources that are available. If he didn't live in a good area, it would be difficult to find a preschool where his son would get the proper education.

There was a private school that he wouldn't be allowed to attend because of his Autism. Schreiner feels passionate about all Montanans having access to equal education.

Education is something that he feels all Montanans should be given access to and one of those things is equal opportunity to education and health care. With his son being on the Autism spectrum, it was difficult for him to find a special education services that would be willing to accept a child who was Autistic.

On the topic of education, Schreiner said he feels it's important to invest in those who need it the most.

"We need to re-skill those who need it," Schreiner said.

He went on to talk about the issue of mental health in the state. In 2015 he supported the Native American and Rural Youth Suicide Prevention Pilot Project. While the bill died in legislature, Schreiner said he feels it's something that needs to be addressed.

When asked where he stands on legalizing marijuana, Schreiner said it's a topic he's torn on.

"The downside for youth could be dramatic," Schreiner said.

Schreiner went on to talk about the drug epidemic in the state. He told a story of someone he met who needed drug treatment but didn't have access to it. They were told by a law enforcement agent to steal something, so they would be incarcerated and would then be able to get the treatment needed.

"We have a broken system," Schreiner said.

One of the participants at the meet and greet asked Schreiner how he feels he differs from his opponents.

"My values are different, and my perspective. Having a teacher in the governor's office is really important. We know what everyday Montanan's deal with," Schreiner said.