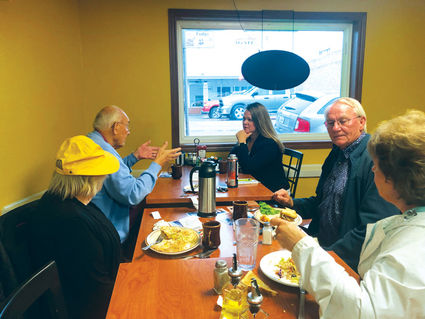 Dudik listens to voters on Sept. 11.

During her campaign of running for Montana Attorney General, Kimberly Dudik paid a visit to Sidney where she met with the public for a meet and greet at Sunny's Family Restaurant.

Dudik has spent time in the legislature, as assistant Attorney General and as a nurse.

"My career has always been about helping people," Dudik said.

One of the first things Dudik addressed was the issue with meth in the state, as well as the heroin and opioid problem. Dudik stated that 60-80 percent of all crimes are drug related. One thing Dudik said she feels passionately about is keeping children safe.

Dudik said that too often children are removed from their home because of drug abuse. If drug treatment was more readily available to those who needed it, children wouldn't be pulled from their homes and families.

Along with that comes the workforce struggle. There are too many people without jobs because they can't pass a drug test or they're unreliable because of their addictions.

"Making Montana communities safer, protecting children from abuse, and ending the cycle of criminal justice involvement are why I am running for Attorney General," Dudik's campaign says.

According to the candidate's material she passed out at the meet and greet, she is a champion of reforms in public safety. Her leadership, working with bipartisan groups throughout the state, has led to substantive changes that guard communities from sex offenders, protect vulnerable populations, especially children, enhance substance abuse and mental health treatment and improve criminal justice.

One of the things that Dudik worked on during her time in legislature was a bill that protected pregnant women from having charges brought against them if they were using drugs during pregnancy.

"It's proven that women who are pregnant can beat their addiction by 80 percent if they receive the help they need," Dudik said.

She also discussed that she is working on something to make it to where the way rape kits are used and the availability of them would change.

When asked how she differs from her opponents, Dudik said that she has a wealth of experience that her opponents don't have. She also said she is a domestic violence advocate.

"Nobody on the democratic side has that," Dudik said about her experience.

Dudik went on to talk about public land and how she is a strong advocate of it.

"I would never enforce unconstitutional law," Dudik said in regard to public land.

When a participant of the meet and greet brought up the issue of child safety, Dudik explained a term called grooming. When a person spends their time grooming a child for an inappropriate relationship. Dudik said she passed a law making grooming a crime. The law passed in the 2017 legislature, HB 247. It passed with 100% support. https://leg.mt.gov/bills/2017/billhtml/HB0247.htm

"Instead of removing a child from their home, we need to work closely to make the home safe," Dudik said.

She went on to add that one thing everyone can agree on is child safety.

"We need to advocate for everyone," Dudik said.