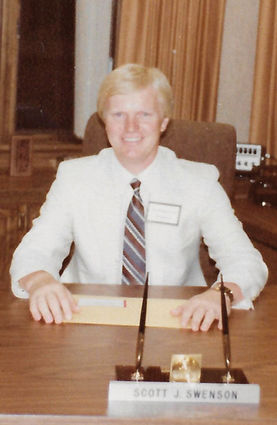 After working in banking for nearly 47 years, Scott Swenson is retiring. In lieu of a retirement party, Swenson has opted for a customer appreciation party because customers are what it is all about. Swenson says his favorite thing about being a banker has been helping people realize their financial dreams: from buying a new car or house to starting a new business to helping get the crop planted. For Swenson, greeting customers as they came into the bank was a highlight each day.

"Seeing customers succeed and being able to help them along the way was so rewarding. I am grateful for the life-long relationships that those partnerships formed. I'm also extremely grateful for the dedication of the people I worked with over the years. It was fun to come to work," said Swenson.

Born in Minot and raised in New Town, Swenson shares the same birth year as the community of New Town.

Growing up on his Dad's farm, he developed a love of farming and a great understanding of agriculture. Just like his love of agriculture started in New Town, Swenson's passion for banking also started in New Town thanks to an internship at Lakeside State Bank. Then bank president Darold Petersen put Swenson through a training program including working in the teller line, running the proof machine, and doing ledger entries. That experience led him to pursue a banking and finance degree at the University of North Dakota (UND).

Swenson graduated from New Town High School in 1971 and went on to graduate from UND in the spring of 1975. That fall, he started his first full time job at First National Bank, where he had worked as an intern during college, in Grand Forks. Swenson worked at First National Bank until the fall of 1981, when he was given the opportunity to help start McKenzie County Bank in Watford City.

Swenson's UND pride carried on at McKenzie County Bank making for some friendly rivalry with co-workers who were NDSU fans. Vicki Monsen, Watford City Market President, recalls the annual race to the flagpole. "Each year after the UND/NDSU football game, the winning team would get to fly their college flag on the bank flagpole. When UND won, it didn't take Scott long after the game was over to get the UND flag raised!"

Along with being a banker comes being a part of building and supporting the community. Swenson is dedicated to seeing Watford City and the surrounding area grow and prosper. He was an active member and served as President of the Chamber of Commerce, Economic Development, Rotary Club, and Watford City Golf Club. He also served as Chairman of the Sales Tax Advisory Board, was active in the Watford City Area Dollars for Scholars, and continues to be a Director of the McKenzie County Healthcare System. In addition to being active in his community, Swenson was also active in the banking industry. A memorable time in his career were the years that Swenson served in several positions, including President, on the North Dakota Bankers Association Board during which he made many friends across the state. Swenson also served on the Government Relations Council of the American Bankers Association and is a past officer of the American Institute of Banking.

From starting McKenzie County Bank from scratch in 1982 to merging with Cornerstone Bank in 2014, a multi-bank organization with nearly $1 Billion in assets, Swenson has seen many changes during his career. Although he is retiring from day-to-day duties at the bank, Scott continues to be active in the organization as a member of the Cornerstone Bank Board of Directors. On the lighter side, Swenson looks forward to spending more time with grandchildren, chasing a golf ball, and catching a fish or two.

To celebrate Swenson's career, Cornerstone Bank will be holding a Customer Appreciation Party on Thursday, October 3 from 11 a.m. – 2 p.m. at their Watford City Bank located at 106 8th Ave SE. All are invited to come and enjoy lunch and desserts.