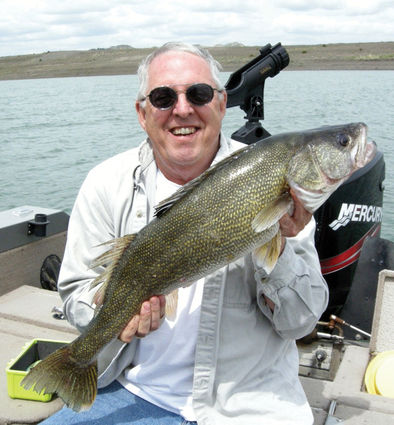 Russ displays one of the largest walleyes he ever caught.

Wells exhibited a talent for newspaper work from the outset. He participated in the publication of his high school paper and when he attended Dickinson College, he joined the college newspaper staff. He and a friend collaborated on the Me & Mrachek column, a feature that proved so popular everyone on campus knew Wells and his friend Don, by sight.

After attending Dickinson College, Wells went to work for the Dickinson Press as wire editor and then as sports editor. Wells was hired as Sidney Herald editor in 1967, which made him the youngest editor in Montana at the time. He then moved to Livingston to be editor of the Livingston Enterprise. From Livingston he became the editor of the Big Timber Pioneer and opened a photography studio, concentrating on wedding pictures.

In 1976 Wells continued to work for Wick Communications taking a 3-day publication to a daily. While in Arizona he managed five newspaper publications for Wicks in Arizona, plus the Sidney and Williston papers.

Wells returned to Williston to manage Scofield Broadcasting until 1983 when he moved back to Sidney as the publisher of the newly-formed Richland Free Press. After a year, with the help of three investors, he began operations of the Richland County Leader in the basement of his home and slowly moved to larger locations as he developed it into a viable newspaper.

Wells moved to Florida after his retirement, but he returned to Sidney in 2017 .

Wells first and foremost loved the news business. He enjoyed the photography aspect and found his niche in the investigative part of newspaper work. He would see a problem in each city, dig into it, and look for ways to solve the problem through the voice of his newspaper.

Wells was very community oriented. He possessed a great talent for advertising and raising awareness of an event that promoted the town and surrounding area. His brainstorms were instrumental in starting the Peter paddlefish Day, Sidney wresting program, Western Days, Sugar Days, 4th of July celebration, Sidney's Got It and Beef Showcase. He was a driving force behind the MonDak Heritage Center, Courage Enough (2 volumes), MonDak Walleyes Unlimited and the Walleyes Unlimited Annual Kids Fishing Derby held at Gartside Reservoir, which included all the 6th graders in the county getting hints from the membership. Each student was presented with their very own fishing rod and reel.

Wells also was very agriculture oriented. His ideas and vision created the monthly Ag Roundup to promote and highlight agriculture in the area. He developed the Ag Days Trade Show, started the ag appreciation golf tournament, where, of course, the Roundup had the favorite hole, the Margarita Hole. 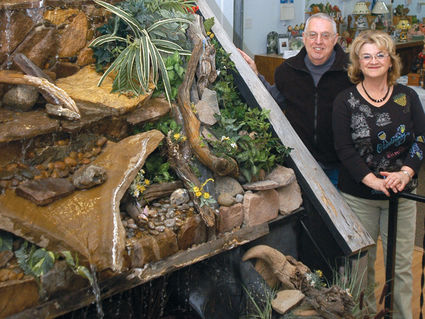 Russ and his wife Linda next to the waterfall located inside the Yellowstone Marketplace.

Wells always tried to focus on good news in his publications. He wanted correct, factual information, and wanted to promote events in a positive light so people would attend. The Roundup succeeded in this endeavor as the paper covers all of Richland County, McKenzie County, and the surrounding area.

Wells also dearly loved fishing. He created the fishing page in The Roundup, awarding a new rod and reel to anyone submitting their photo to the page

Wells will be missed. His many contributions to the MonDak region have benefitted both the public and the private sectors, and the community will continue to enjoy events that Wells initiated and promoted.