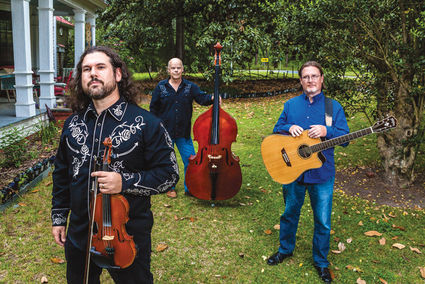 Dennis Stroughmatt et L'Esprit Creole will be performing at the MonDak Heritage Center's HarvestFest event on November 8.  Along with Dennis Stroughmatt et L'Esprit's music, attendees will also enjoy seasonal beer and brats (wine and punch for non-beer drinkers) as part of the HarvestFest fundraiser. Tickets are available through the MonDak Heritage Center, $50 per person, $40 for MDHC & NAN members. Attendees for this event must be 21 or older to attend.

Originally from southeastern Illinois, Dennis Stroughmatt was taught to play fiddle by Missouri Creole fiddlers Roy Boyer and Charlie Pashia in the tradition of their fathers. He became an adopted son of the French Midwest Creoles who settled near St Louis, subsequently playing at weekly local French Creole house parties or "bouillons." As a result of his physical journeys that have also included French and musical studies in Louisiana, Quebec and Tennessee, Dennis finds himself in a unique position as one who can speak knowledgeably and play in a variety of French and Cajun/Western Swing styles. He has an innate sense of what is needed to get an audience on their feet, keep a band on its toes and educate throughout. Dennis Stroughmatt et L'Esprit Creole are now passionate ambassadors of Creole music and traditions, expanding interest and excitement in a region that has been ignored by the history books.

This medley of music, language, stories, and culture secreted away in the Missouri and southern Illinois Ozarks now has a voice in the tapestry of this world. With the blessing of the Creole people of the Midwest, Dennis Stroughmatt et l'Esprit Creole work to expand interest and excitement in a region that has been, in many ways, forgotten by the march of time. But what many have considered to be long lost is alive and kicking.