Me & Mrachek One More Time 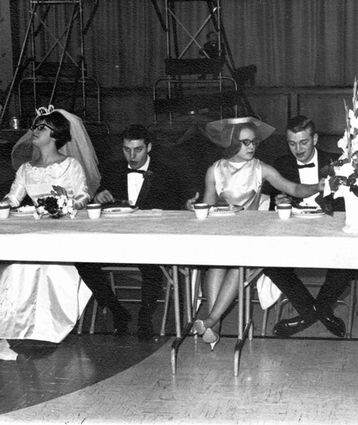 Russ and I met in the fall of 1963, Russ had recently moved from Minnesota to Dickinson with his parents and family.

Russ's dad, Joe, and his older brother, John, were drawn to Dickinson with a company that built electrical transmission lines.

Russ and I met in the Journalism Department at Dickinson State University. We hit it off right away and became best friends. Besides everyday journalism classes the department put out a newspaper called the Western Concept. Russ and I wrote a column about things happening on campus called Me & Mrachek. Russ named the column.

Little did we suspect that the column would become so popular that everyone from the nerds, the athletes, the regular kids to even the faculty waited for the paper to come out to read our column.

I had a girlfriend, Donna, who is now my wife. We both were from Alexander and so we made lots of trips home on weekends. Russ decided to come with us and on one of those trips, when we were driving around town, we stopped to talk to some friends. It was then that Russ met Linda and they were a couple from then on.

Russ and I were involved in a lot of adventures over the years. I lived with Joe and Marilyn, Jerry, Helen and "Gush" for a time while I was going to college. It was a great time, one I'll never forget.

I went into the Navy, encouraged by my local draft board. It was the Vietnam era but I was lucky and spent my entire tour of duty in Japan working between the public affairs office, heading up the base news magazine and at the military newspaper Stars and Stripes. When I got out of the Navy, Russ got me my first job in the civilian newspaper business. He hired me as editor of Sidney Herald.

We spent the next few years working together and apart. While he was in Arizona, where Wick Communications was headquartered, I would attend conferences there and Russ and Linda always made sure Donna and I were taken care of when we stayed a few extra days.

Russ and I were in northern Ontario, Canada on a fishing adventure with his family in 1980, when Mt. St. Helens blew its top. With no outside news or communication it was an eerie feeling when the sun didn't come through for four days because of the volcanic ash. We finally got a three-day old newspaper from a lodge 30 miles across the lake and found out what had happened.

I could go on and on about the things we did together like tipping over my uncle's tractor while packing silage in a pit on his farm; Russ setting the record at Dickinson State College for the most consecutive sit ups at one time; organizing a "Little Kids Christmas Tree Fund" in college so we could replenish our beverage supply; baking buttercup squash on the riverbank by Williston; and trips to Russ and Linda's winter cabin at Gardner, Montana.

Russ and I lived, hunted, fished, camped, chased girls, got sick and got well together. We partied, healed up from partying and worked together for years. He was a good friend and I'll miss him.