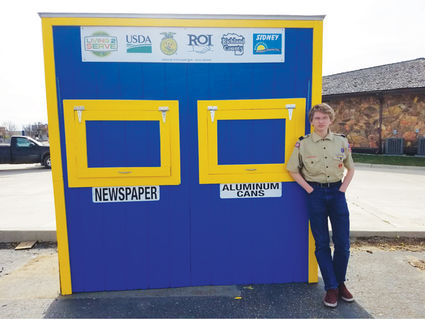 "This project took a lot of hours," Daniel says. His father and troop leader Bart Stevens agreed. This project included the cleanup and repainting of seven ROI recycling bins around Sidney: two bins at central school, two in the Western Choice Co-op parking lot, one at Johnson's Hardware, one at Reese & Ray's IGA and one at the new NAPA store location on Main St. ROI recycling bins take newspapers, magazines and empty aluminum cans. Each ROI recycling bin took two coats of paint, new signage and approximately six hours per volunteer to complete the updated look. Daniel and his father calculate that no less than eighty-four hours of total volunteer time was given for this project. Daniel had support for his project from various students and adult volunteers that helped with the painting and clean up work. He scheduled each bin and had between two and eight volunteers each time depending on each volunteer's schedule. All project materials were supplied by Dan Peters at Richland Opportunities, Inc.

"I think that my project helps the positive image of our community," says Daniel. With this project he wanted to not only highlight our community's need for continued recycling but also the world's need as well. "These bins look really nice and I think my project standards have been met."

There are 15 youth in Troop 190 and five are working on completing their Eagle Scout Badge through projects like this one of Daniel's.