Excessive Rain Puts A Damper On This Year's Grain Harvest 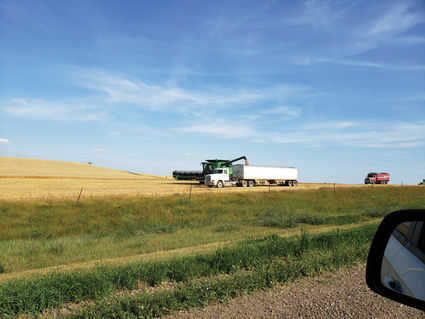 Harvesting wheat in the Girard area.

This year's harvest has been difficult for farmers all across the MonDak area. This is due to continuous rainfall plaguing farmers' attempts at combining. This type of weather puts a big damper on harvest and causes sprout damage, quality/yield loss, and an overall delay in harvest, which has the farmers paying more than they are earning.

Just for the month of September Williston, North Dakota received so much rain that it is now their wettest September on record.

Although rain seems to be a good thing for farmers, it sure is not the case during the months of harvest. According to the U.S. Department of Agriculture, as of September 15, 2019, just 69 percent of Montana's corn crop was harvested, and for North Dakota, 73 percent of corn has been harvested as of September 15.

Continued wet weather conditions are slowing dry down and encouraging fungus development on crops. Some fungi produce mycotoxins that are harmful to animal and human health. Excessive rainfall also creates moldy grain, which causes a shorter storage life than clean grain held at the same moisture and temperature. The moldy grain is expected to have only 60% to 70% of normal storage life.

This weather also promotes quality loss, which is arguably the most significant detriment to farmers. A lot of acres of quality-sensitive crops are very susceptible to rains when they are mature. Durum, in particular, loses its glowing amber color, which is a significant factor when it comes to grading. Lentils, green peas, and other wheat classes are susceptible as well, and losses can increase in those crops along with the durum.

Yield loss is also a factor caused by heavy rainfall during harvest. Eventually, given enough rain, even tolerant crops like canola can start to lose yield. The rain washes the seed so much and so aggressively that it begins to lose weight. The lighter each seed gets, the fewer tonnes of grain growers end up with at the end of the day. Wheat is one of the most sensitive to this and can lose quite a large amount of yield to this phenomenon.

Sprout damage is also a big concern for MonDak growers this year. It occurs when grain kernels start to germinate when the crop is still standing (pre-harvest sprouting). Sprout damage correlates to Falling Numbers, which affects the overall seed value.