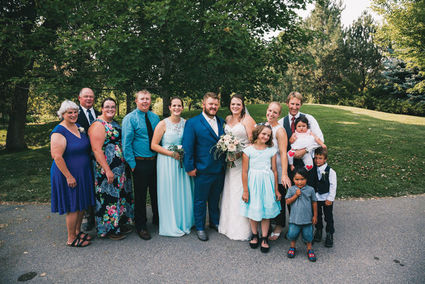 Scott Staffanson began farming in 1984 when he and his dad rented a farm. Thirty-five years later, he still carries on the farming tradition. This time he farms where his grandfather, Jesse Staffanson, homesteaded, which is located just five miles south of Sidney, Montana.

The Staffansons farm around 265 acres and maintain a cow-calf operation. "We have a 140-acre pivot, and we flood irrigate 125 acres. We were fortunate we did not have any small grains this year," stated Scott.

Scott now shares his love for agriculture with his daughters; just as his dad did with him.

Scott's daughter Amanda and son in law Caleb Snodgrass are also involved in farming and ranching. They raise beef cattle and have their own dryland farming on the place. "They have built their own house west of us, and have a yard full of chickens and grandkids," said Scott.

In December 2016, his daughter Jesse returned to the Staffanson farm after obtaining a degree in Animal Science - Livestock Management and Industry at the Montana State University in Bozeman, Montana. She now helps out with all aspects of the farm and ranch.

"The past three years since I moved home, I have worked full time on the ranch. I am basically in charge of the cattle year round and ask my dad for help when needed. As far as farm work, I help with whatever needs to be done, whether that is swathing, irrigating, running the tractor, etc. I like to call myself the "cattle manager." More and more, I am getting to be part of the decision making," said Jesse.

She has taken an Artificial Insemination class to enhance specific genetics into her and her family's cattle herd. "AI has been a hard learning experience. But I am hoping to bring some superior genetics into our herd. I want to improve the cowherd and make our calves more marketable. It was really cool to watch the AI calves jump up off the ground this spring. I was like a proud mama. Or father. Not sure which!" added Jesse.

Jesse raises her own herd of dairy and beef cattle. After years of raising bottle calves for her dad, she traded in all of her work for a bred heifer. "Herferdialia became my official first beef heifer. I could not have chosen a better matriarch for my beef herd. She is going to be 12 this spring, and she is definitely one that makes replacement heifers. I have five of her daughters in our herd and another at her side. I have expanded my beef herd more and more over the past three years. My goal is 100 pairs before I get married, because cows before vows!"

Jesse explained that she has always had a love for agriculture but had no idea she would be ranching at the age of 25." Before I headed off to college, I was set on going to veterinarian school. I started out as a "pre-vet" major, but after a semester and a good heart to heart with my parents, I dropped the pre-vet plan. Ranching was kind of a minor part of my long term plan. I never really saw myself doing this at 25. I seriously thought I would be in school still!"

The Staffanson family enjoys farming and ranching, "I enjoy the peace of being able to work with my family. I also enjoy watching things grow, especially when I have a good crop or calf crop," explained Scott. "The thing I find most enjoyable is watching those tiny 60-pound calves grow into cows. I love being on watch for the next cow or heifer to have a calf," stated Jesse.

Scott explained that he hopes to pass the farm on down from generation to generation, and Jesse said "Farming and ranching is definitely something I want to keep doing. The ranch is a place that I feel completely myself. I have so much to learn, but I feel like I am getting a grasp on some of it. Slowly."

We love the Staffanson family. They are a great example of what Montana families are. We are so proud of their leadership and thank them for their ability to stand firm on correct principles. Working beside Scott in the 65th legislative session was a highlight for me. He has a tenderness for this state that makes him a giant of a man. When I think of what makes Montana the last best place I think of families and opportunities ranching and farming has given to generations. May God bless them.