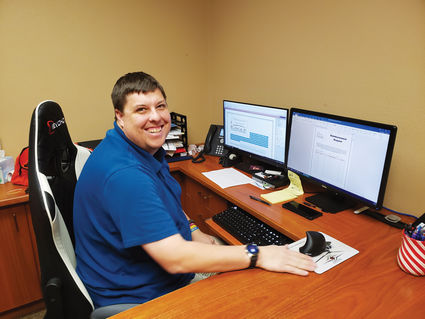 On October 21, Sidney mayor Rick Norby again proclaimed November 1 as Extra Mile Day, a day dedicated to volunteerism. Sidney was the first town in Montana, besides the larger cities, to become a part of this national day. Norby said he wanted to recognize the many non-profits, boards and individuals who do so many great things in the community. No special events are planned, but Norby hopes that another organization will grab hold of the special day and do some events in the future. Of Nick Kallem, Norby said that he is a fine example of someone who is involved in everything.

Nick Kallem moved to Sidney from Laurel in 2016 and immediately became involved in the community as a volunteer. He had come here earlier with Town Pump and discovered a welcoming community for young people like himself. He left for awhile, and then returned to what he now considers home. He is the audio-visual coordinator and drives school bus for Sidney Public Schools. Kallem is currently enrolled at Bellevue University seeking a Bachelor's degree in Emergency Management.

Volunteering is certainly not new for Kallem. While in middle school, he volunteered for Help for Homeless Pets and was a Prudential Spirit of Community Volunteerism award winner. He was also a Junior Volunteer at St. Vincent's Healthcare and a Counselor in Training at the YMCA.

While staying with family in Wolf Point, Kallem traveled to Sidney to volunteer with the Richland County Ambulance Service. "I got great experience from this service. It's a cool ambulance crew," he stated. He is now a valuable EMT, helping people during critical moments in their lives.

After losing a brother eight years ago, Kallem and his family became very active in suicide prevention. He and his mother serve on the board of the Montana Chapter of the American Foundation for Suicide Prevention, Nick is chairman of the Out of the Darkness Walk in Sidney, while his mother is chair in Missoula. His sister and father also help in any way they can. "It's important to try to help prevent suicide so no one has to go through the loss my family had to go through," he explained of his dedication to that important cause. The group had its second walk this year with Montana having a really good year. "See you in 2020," Nick said.

As vice-president of the Eagle Foundation board, Kallem is involved in grants to the Sidney Schools which can cover costs when conventional school funding doesn't work. Examples of their projects include the bleachers and the new concession stand and restrooms on the north side of the football field.

Kallem loves Sidney and will continue volunteering in any way he can "It's nice to see how receptive people in the community are to supporting each other," he said.