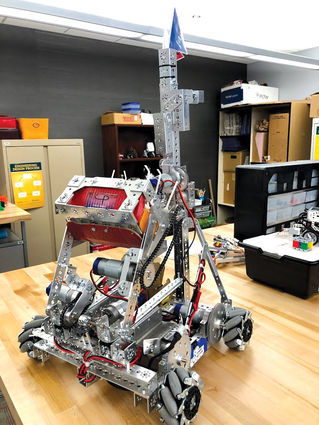 Building robots in school might sound like science fiction, but this is nothing out of the ordinary for students participating in the Alexander Robotics Team.

Since 2015, Alexander Public Schools has been offering a beneficial STEM program where students can participate and compete in building robotics.

The purpose of having a robotics team is to give students an opportunity to explore new technology, learn critical skills, and promote the field of robotics through entering a variety of competitions.

The Alexander Robotics Team meets every day during school to work on different designs for robots and practice STEM-related skills. "The robotics team is a part of the STEM program we have at our school. It is offered as a class and is a Career and Technical Education course in which they receive credit. The students apply 21st-century skills in the class. They work on their communication skills by talking with their teammates but also with other students and community members. The students collaborate as a group to create a design for a robot. They use critical thinking skills to solve the yearly challenge but also challenges they may face while building and programming the robot. They incorporate creativity throughout the year," explained Alexandria Brummond, the Alexander Robotics Team Coach/Mentor and Technology/Engineering teacher at Alexander Public Schools.

There are currently nine active members. "Last year, the team only had six members, and each year, our team has grown. The teams can only have 15 team members. The students who are on the team are in grades 10-12," said Brummond.

The team is part of For Inspiration and Recognition of Science and Technology (FIRST) organization. Each year FIRST puts out the challenge for the robotics teams. Brummond added, "The challenge is different every year, and the teams have to build a robot to complete the challenge. The challenge for this year is that the students have to create a robot that will move a block and be able to stack each one up to create a tower. The robot also has to be short enough to go under a bridge."

Since February 2016, the Alexander Robotics Team has competed at the North Dakota State First Tech Challenge (FTC) Competition. They were awarded the 2nd place Alliance Team and the Judges Award at the state competition in 2016 and 2018. They have also been awarded the 2019 Design Award.

Brummond explained that the team's goal is to bring awareness of STEM and Robotics to the community and surrounding areas. Another goal of theirs is to win the Inspire Award at the North Dakota state competition and advance to the World Competition, which will be in Detroit, Michigan, in April 2020.

"This last summer, four team members went to Washington D.C. to advocate for STEM and Robotics in schools. They were able to talk to North Dakota Senator Hoeven and one of Senator Cramer's staff members and Congressman Armstrong. One bill that the students were advocating while they were there was the commemorative coin for Christa McAuliffe. The president has since signed that bill. For each coin sold, $10 will go to the FIRST organization," said Brummond. 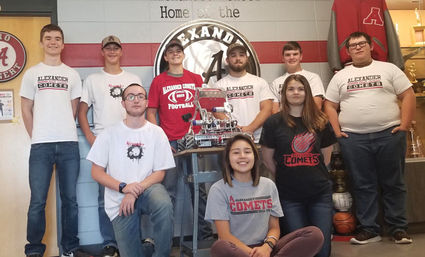 Cathy White and Alexandria Brummond are the Alexander Robotics Team coaches and mentors. They explained that they both enjoy watching the team members' passion grow for STEM projects. White stated, "Some of my favorite things about coaching the FTC Robotics team are watching the students face a challenge, deliberate and come to a consensus on a solution, and if it doesn't work, they start again. I love to see the dedication the students have, the closer we get to competition; they are very focused and determined to get things done. All of these are very important skills to have now, but also later in life as they face very different challenges."

Brummond added, "What I find most enjoyable about coaching the FTC Robotics team is seeing the students face their challenges. I love seeing their enthusiasm, dedication, and determination to solve the challenges and prepare for their competition."

The robotics team is asking for sponsors to help fund their trips to competitions and other expenses. The team will be hosting two fundraising events in November. There will be a craft and vendor show and a dodgeball tournament held in Alexander on Saturday, November 23. For more information you can call Alexander Public Schools at 701-828-3334.