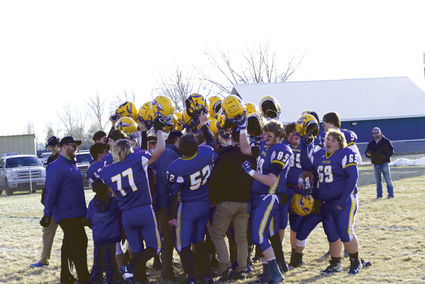 The Fairview Warriors celebrate after beating Fort Benton in the semi-final round on Saturday. The Warriors will face Alberton-Superior for the state championship at 1 p.m. this Saturday at Rocky Mountain College in Billings.

When the current Fairview football players were in elementary school, they watched as the high school players of that time advanced to the state football championship game. Those youngsters put that goal in their minds for when they reached the high school ranks.

On Saturday afternoon, the current Warriors accomplished that dream with an impressive 48-8 semi-final victory over Fort Benton.

"It's unbelievable, it's very emotional," senior Alex Schriver said after the home win.

Cody Asbeck added, "It's awesome. It's been a goal for four years."

There was little doubt about the outcome as Asbeck, a senior, reached the end zone on his first two touches with touchdown runs of 49 and 41 yards.

"Especially on the first one, we set the blocks up really well," he said. "You don't expect that on the first play. It was a big confidence boost."

The Warriors led 28-0 after the first quarter and 42-0 at the half. Fort Benton's only touchdown came in the fourth quarter.

"We've relied on our defense all year to shut down the other team," Asbeck said.

Schriver noted, "Our preparation on defense was great. We knew what they were going to do."

The Warriors will face Alberton-Superior at 1 p.m. Saturday at Rocky Mountain College in Billings for the state title. Fairview is attempting to win its first ever state football title.

After a 49-yard run and a two-point conversion by Asbeck gave Fairview a quick 8-0 lead, Fort Benton's first possession ended when Garrett Diekhans was tackled for a loss by Brady Buxbaum on a fake punt attempt. The Warriors scored on Asbeck's 41-yard dash for a 14-0 lead with 9:22 left in the opening quarter.

The Longhorns then fumbled the ensuing kickoff, and the ball was recovered by Gabe Schipman on the Fort Benton 25. A nice run by Jesse Selting produced a first down at the seven. After a gain by Asbeck to the four, Schriver scored with 9:05 remaining in the quarter.

After a strong defensive play by freshman Hunter Sharbono helped force Fort Benton to punt the ball, the Warriors put together a 65-yard, 11-play scoring drive dominated with runs by Asbeck and Schriver. Asbeck scored from 24 yards out with 1:52 left in the opening quarter. The senior also battled in for the two-point conversion and a 28-0 advantage.

A great defensive play resulted in Fairview's next score when Sharbono recovered a fumble and returned the ball to the Longhorn four. From there, Schriver scored with 6:46 remaining in the half.

Fort Benton responded by driving inside the Fairview five. A 34-yard dash by Jace Thompson earned a first down at the five.

After a run by Diekhans was stopped for only a yard by Braiden Taylor, a second-down pass attempt was defended well by Schriver. The next two downs resulted in incomplete passes. Fourth down featured heavy quarterback pressure by Taylor and Josh Herron.

Fairview's final touchdown of the half came on a 44-yard keeper run by Schriver with 3:28 left in the half. Asbeck ran in the two-point conversion for a 42-0 margin.

The Warriors reached the end zone in the third quarter when a shovel pass from Schriver to Selting resulted in a 29-yard touchdown play to put the score at 48-0. 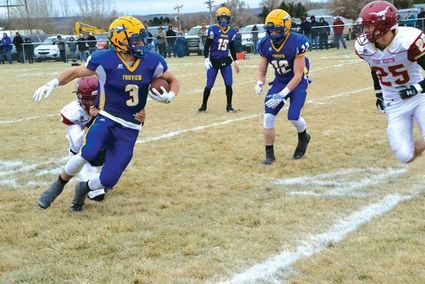 Fairview's running back Cody Asbeck goes for a gain against Fort Benton on Saturday. The senior scored touchdowns on his first two carries of the game.

Fort Benton's touchdown came on a 50-yard run by Hayden Axtman with 8:18 remaining in the game.

Asbeck finished with 158 yards on 12 carries while Schriver gained 109 yards on 10 carries. Schriver passed for 106 yards.