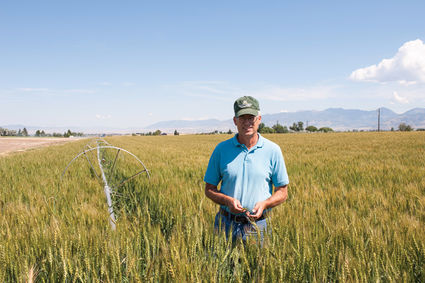 Luther Talbert stands in a field of spring wheat. Talbert has researched spring wheat varieties and plant genetics at MSU for more than three decades, and was named a fellow of the American Association for the Advancement of Science on November 26.

Bozeman - Montana State University professor, plant geneticist and spring wheat breeding specialist Luther Talbert has been named a fellow of the American Association for the Advancement of Science, the world's largest general scientific society, in recognition of his decades of research in MSU's College of Agriculture. The AAAS publishes the prestigious journal Science as well as a family of related journals.

Talbert is one of 443 AAAS members to be named fellows this year for their distinguished efforts to advance science. He is one of 19 fellows in the Agriculture, Food and Renewable Resources section, noted for his "innovative translational research resulting in great benefits to the U.S. economy and understanding of genetic phenomena of importance to global food security," according to the AAAS.

Talbert has researched spring wheat breeding and genetics in the Department of Plant Sciences and Plant Pathology for nearly 32 years. He has worked to develop dozens of spring wheat varieties and has been instrumental in making MSU-developed varieties some of the top contributors to the $700 million Montana wheat industry. With consistent funding from competitive federal granting agencies he has also published in more than 130 papers in a variety of scientific journals.

In 2018, Montana producers planted nearly 3 million acres of spring wheat, of which about 25% was the MSU-developed variety Vida. Vida has been the most widely grown spring wheat in Montana since 2010.

The honor caps an illustrious career for Talbert, whose contributions to the fields of agriculture and plant genetics are being recognized just a month before his retirement this December.

"This job was what I envisioned doing: plant breeding to develop varieties and also having the opportunity to be a part of a university," said Talbert. "Looking back, I feel like I was part of a team. There have been a lot of great collaborators and support from the wheat growers of Montana. I've been very fortunate to have such a great group of people to work with."

"Teaching has been a fun part of my job," he said. "I get to see the students come through, and it always makes me realize that the future is in good hands."