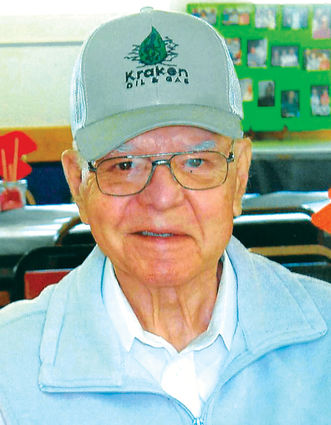 Visitation for George Swenson, 91, of Sidney, MT was held Thursday, December 5 from 2-4 p.m. at Fulkerson-Stevenson Memorial Chapel. A memorial service is planned for a later date in the spring. Fulkerson-Stevenson Funeral Home of Sidney is caring for the family. Remembrances, condolences and pictures may be shared with the family at http://www.fulkersons.com.

George passed away early Monday morning, December 2 surrounded by family at Extended Care in Sidney, MT. He and Doris had been married 72 years.

George, the second child of Oscar and Iva (Sando) Swenson, was born on February 22, 1928 in Audubon, MN. The Swenson family moved to Sidney, MT in the summer of 1935.

George began his tenure in the Sidney area as he entered the second grade at Sidney Public Schools. He signed up for his social security card in 1937 when he started setting pins at the Sidney Bowling Center at the age of nine. His recollection of one of his first business ventures was borrowing $25 from the Richland County Cooperators Credit Union at a young age to buy a used bicycle with a 25 cents per week repayment schedule, which was paid off by pedaling a Billings Gazette paper route. George graduated high school in 1946 and enrolled in the School of Engineering at Montana State University that fall. He returned to Sidney and married Doris Obergfell on September 20, 1947.

George started at Holly Sugar in 1947 where he spent most of his years in the accounting department. While at Holly he completed a home study course in accounting through LaSalle University. In 1962, George became the business manager for the Eastern Montana Clinic and the local representative for Blue Shield of Montana. During this time period he played second base for the Sidney baseball team in the summertime, and officiated basketball throughout the area in the wintertime. In 1965, he and his brother Oscar "Doc" started Swenson's Marine, a boat, sport and travel business. George bought an interest in the operating part of Richland Machinery Company in 1969, and started Action Auto Inc., a retail Chrysler, New Holland, and Versatile dealership that he operated until 1985. He continued as the local representative for Blue Cross Blue Shield of Montana until his retirement in 2004 at age 76.

George always enjoyed building, whether for himself or his community. Over the years he remodeled, added onto and built several homes and investment properties in the Sidney area. He was on the city council when the new city hall was built, and the new sewer main line was rerouted and installed. He was a member of the building committee when the new People's Congregational Church was built, and on the board of directors during the building of Crestwood Inn. George enjoyed being a part of his community and belonged to numerous service organizations including Richland Economic Development, SHC Clinic Board, Kiwanis, Masons, Shriners, Moose Lodge, Elks Lodge and Toastmasters. He was always willing to lend a hand.

A special thank you to the staff of Angel Avenue for their loving care and support given George and his family. Memorials may be given to Angel Avenue at Extended Care, Richland County Food Bank, or People's Congregational Church UCC.