Fairview Senior Projects Showcase The Giving Spirit Of The Community 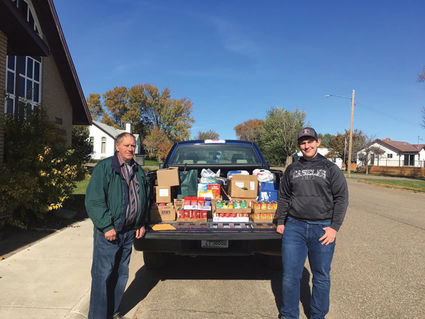 Mrs. Faith Oakland pushes her Fairview high school students to be more than their standard title of teenagers. She wants them to be community members, especially her senior English students who have the opportunity to shine with their senior projects. Her group of 32 senior students this year has chosen some interesting and unique assignments for their senior projects and, in the spirit of the season, these projects are developed with some core understandings, the main core being that students understand the community needs and choose projects that will have direct impact. This means doing some research, asking questions and learning what and where needs are in Fairview and surrounding areas. Each student must develop a plan, work through each element of that plan and evaluate the results after completion. These skills are essential in the scientific process and develop the basis for structured analytical thinking, communication and problem solving.

Since need is great wherever you are, the students were encouraged to choose a project based on their own interests as well. The diversity of the projects this year reflects how unique each students' interests are when it comes to their community. Oakland is amazed at how many unique projects the students came up with this year and how impactful they have been or will be to the community.

Senior projects are an excellent way to engage students in exploring areas of their own community or regional areas while developing a sense of belonging and pride within that community. To this effect, outlined below are several of the projects the Fairview High School seniors have developed:

Last summer Ally, a long time FFA member, volunteered at High Plains Vet in Sidney where, among other valuable lessons, she was made aware of the struggles clinics like High Plains have with sheltering unclaimed animals. Part of her volunteer time was spent taking care of these homeless pets and as anyone would, she grew to care for the many animals during her time there. Funding to take care of these animals beyond basic needs is very limited so Ally's project, Presents for Paws, asks people to donate items that can be used to make the animals more comfortable, feel more loved during their time at the shelter. Her project kick starts December 21 with drops at Tractor Supply in Sidney as well as a drop at the basketball game in Fairview that evening against Circle. Ally hopes to receive donations of new blankets, food, durable bowls for food and water for the pets as well as bring insight to the community on pet adoption. "I worked with an amazing Pitbull this summer and one day I came to volunteer and she was no longer in her cage." Ally asked about her and was informed about the limitations of the shelter and that she was put down. "I was really sad about losing her." Ally said. Ally understands the nature of running a shelter but encourages everyone to help support her project to bring comfort to those animals while they are staying there.

"Last year, as part of a class assignment we had to write a proposal on what we would change in our town," Stephanie explains. Her proposal was about how garbage littering the streets, parks and other areas of the main street through town misrepresented how good and amazing Fairview is. Many people agreed with her and she developed a plan to pick up garbage at the local churches, parks and along Ellery, the main highway through town. The project was approved by the Town of Fairview and was completed in one day on October 25 with the help of six other volunteers and trash bag donations from Neu's SuperValu. Stephanie's project timing came on the heals of the city's annual town cleanup day that occurred a short time earlier, so she was pleasantly surprised at the level of garbage that was picked up. "It was a lot less than what I was expecting," Stephanie commented, "but we still filled the large roll off that was donated by Miller's Garbage." Stephanie said that the project went very well but she would do it earlier in the school year if she could have done anything differently. "The work was the most rewarding part of this project." Stephanie said.

Jade Schlothauer has worked in the school's WASP (Warrior After School Program) for several years. This program supports after school activities for Fairview and East Fairview students. Jade enjoys working with the kids in the afternoons but noticed that some families had struggles with food. After talking with the East Fairview school manager, Melissa Elletson, Jade came up with her project to help provide some essentials to kids who were in need of food and supplies during longer breaks, like this Thanksgiving. Within each backpack were a hat, gloves, personal hygiene products and a letter explaining the program. Each child also received a box of food that had items for breakfast, lunch, dinner and snacks to last a longer break. These items included macaroni and cheese, instant lunches, peanut butter, cereal, pancake mix, granola bars, etc. Vess and Sheyenne Hurley in conjunction with Tim Neu donated Neu's SuperValu gift cards to each backpack. Jade raised $1070 along with the gift cards and before the Thanksgiving break, she and her family put together 21 boxes and bags to gift to kids within the East Fairview community. "I put a letter explaining the project with each pack and everyone who responded back was really grateful." Jade said that if she were to do this project again, she would expand it to both schools.

Ask anyone in Fairview how fun it is to drive through the parking lots at Fairview School and you will get a large assortment of negative answers, most inappropriate to print. Well, you would have until this last week when Ethan Neu did something about it. For his senior project, Ethan had a conversation with his uncle over at Neu's Construction about fixing the school's parking lots. His uncle "thought it was a really good idea" and agreed to support Ethan in his project. On December 7 Ethan and a representative of W. L. Neu Construction spent the day blading the parking lots, dumping a truck worth of gravel and cleaning up several areas along side the south end of the ag building, the east parking lot and the entrance to the ag parking lot. He removed parking concrete blocks that were broken, cut out dangerous rebar that was sticking out of some of the blocks and cut down overhanging branches, so the lots looked clean and nice. Ethan also spent time grading the lots to allow for better drainage in the future, hopefully preventing some of the pot holing from happening again. "I have been getting a lot of thank yous from students and adults." Ethan said. In preparation for this work they had to find the water shut off valves within the parking lots to prevent a water incident. Ethan said, "finding those valves was difficult and took some time." In the end though, Ethan was very satisfied with the end result and it seems so are the students and residents of Fairview.

In searching shelters in Montana, Rachel and Nicci came across the Montana Rescue Mission Men's Shelter and the Montana Rescue Mission Women's and Children's Shelter. Both in Billings, these shelters support homeless and struggling people in this region of Montana by providing clothing, shelter, and services. After contacting the shelters, Rachel and Nicci developed their project of the sock drive. "Socks are very important to people in shelters. They provide security as well as warmth. Socks provide the comfort to help people get back on their feet." Rachel quips. She and Nicci launched their project on December 12 during the first regular season basketball game at Fairview against MonDak with a drive box. They also have collection boxes at Reynolds Market and the Sidney-Richland Public Library and ask that donations be of clean new socks. Their goal is to have all donations by December 20 to deliver to the shelters before Christmas.

Some Fairview community member approached Jessie and Tom about a need in the community. Many people do not or cannot keep up with making sure their smoke detector batteries work. Jesse and Tom decided to incorporate this into their senior project. This includes replacing smoke alarm batteries, replacing outdoor lights and accessing exterior vents for icing over. No walking the roofs for these young men but a visual inspection of exterior vents is the first step in preventing gases from backing up into the house during winter when ice and snow can block the gases from escaping. Jesse and Tom's goals are to provide a safer home environment while providing a bit of safety information to residents. Their project starts the end of December and goes through the end of January. They anticipate serving 25-50 people during this timeframe. Look for their promotion on Facebook coming soon. The young men are accepting donations of 9v batteries as well as LED and incandescent light bulbs.

Macy Seadeek and Tanasia Harris, Carry-All-Bags for wheelchairs and walkers for the Senior Center

Last year Macy and Tanasia attended an FCCLA (Family, Career, and Community Leaders of America) membership rally in Bozeman where they came across a similar project being done by another FCCLA group. The young ladies contacted the senior citizens centers in Sidney and Fairview to see if this project would benefit any members and received good response to the idea. They currently have over 20 people signed up to get these customized bags, with more asks likely to continue to come in and both ladies are sewing like crazy before Christmas break. Each carry-all-bag can be personalized with their choice of color, patterns that include holiday, spring, and American flags. These bags are fitted to attach to the front of the walkers or the side of the wheelchair to give access for useful items, like medication, papers, the TV remote, etc. Each bag will have one to two separate pockets depending on the material chosen. Macy and Tanasia will get the first set of 20 out before Christmas and anticipate the project to be completed by the end of February.

Oakland is very proud of the efforts each of these and all her seniors have put into these projects. These projects highlight the ingenuity and empathy of the students. "Yes, they are high school students, teenagers." Oakland believes that somehow those words have been tainted negatively but wishes everyone could see what she gets to experience with these young adults. "These projects allow the community to see more than just a bunch of teenagers but also good members of our community."

Below are the other senior projects either completed or in the process of for this graduating class: 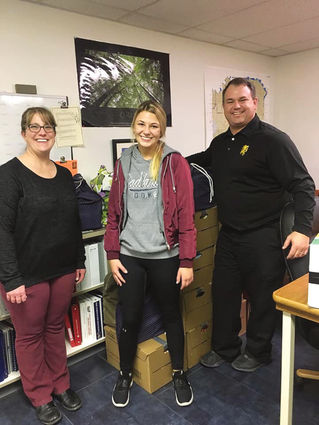 If you are interested in learning more about these and the other senior projects or wish to donate to any of them, please contact Mrs. Faith Oakland at Fairview Schools at 406-742-5265.