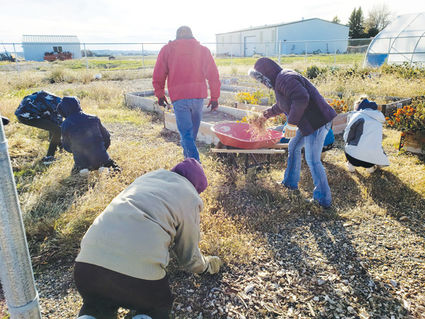 On October 13 several communities in Eastern MT participated in a JustServe.org Community Day of Service.

In Sidney around 50 members of JustServe.org, split into three groups around the community, volunteering at various locations around the city. More volunteers showed up throughout the day to support these activities. According to Kristine Gifford, the local JustServe.org administrator, one group spent time cleaning and weeding the raised beds at the community gardens located north of the Montana State University extension office. They also applied oil as a preservative to the raised beds and constructed two compost bins for use at the community gardens.

The JustServe.org Community Day of Service also happened in a few other regional communities. In Glasgow, Charles Wilson (area JustServe.org administrator) said, "About 12 volunteers helped clear five yards of leaves, clean at the Senior Citizens Center, and organize at the City-County Library." 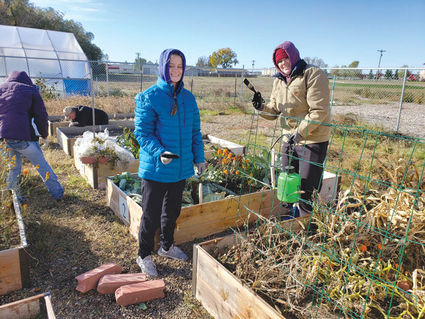 In Broadus, Katie Ward (area JustServe.org administrator) stated, "It was a beautiful day in Broadus for our community service project cleaning headstones and taking photos of them for BillionGraves. There were only two of us there - and were pretty windblown and didn't feel at all photogenic!  The good news is that 49 headstones were added to BillionGraves that day!"

Wolf Point had six JustServe.org volunteers, including the branch President Goodbear, cleaning the Oswego Native American cemetery that had been neglected and needed work.

JustServe.org supports local volunteer needs and activities in eastern Montana every day. Any not-for-profit organization can register and list volunteer needs on the website. For more information contact Kristine Gifford at kristinelouisa.gmail.com, JustServe.org website administrator for Sidney and the surrounding areas.