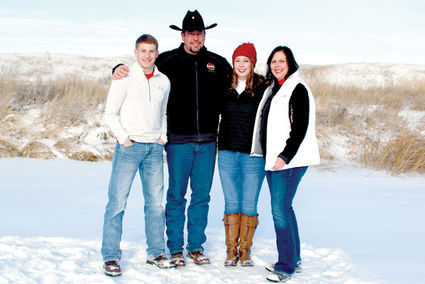 Located in the hills south of Lambert, Regency Acres is a registered Black Angus ranch owned and operated by Russ and Jill Thiessen along with daughter, Téa, and son, Tyler. Russ is the fourth-generation ranching and farming the land settled by his great grandfathers. Russ's grandfather, C.R. Thiessen, founded the registered herd in 1957 under the name Thiessen Angus Ranch. In the early '80s, Russ's dad, Jim, added registered Gelbvieh to the herd and the name was changed to Regency Acres. After a short learning experience, the Gelbvieh were dispersed in '89 and Angus were again the sole focus.

Regency Acres runs around 225 mother cows and sells 70-90 bulls and 30-40 select heifers annually in a production sale that takes place Friday, April 10 at Sidney Livestock yards. The bull calves that don't make the "cut" are castrated and then finished on the ranch where they are sold to a waiting list of customers in a true "pasture to plate" business.

The cattle are run no different than any commercial operation where a cow must perform to strict performance standards while breeding back in a timely fashion and maintaining her structural integrity. Cattle are culled on multiple traits including disposition, udder and structural soundness, performance, phenotype, calving ease, intelligence, and carcass traits.