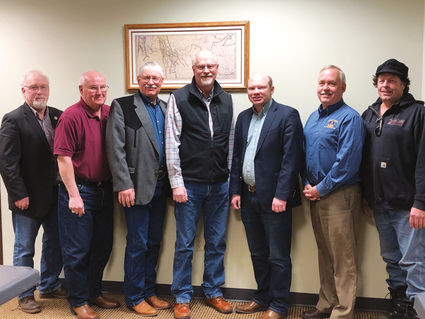 Trenton, ND – Montana and North Dakota legislators representing the Sidney, Williston, Watford City and Bowman areas held an informal meeting at the Missouri-Yellowstone River Confluence Center on Jan. 8. Discussions centered on challenges facing each state and the MonDak region and the comparative approaches being taken.

Discussions were wide-ranging, covering issues such as the region's spring flooding of 2019, annual legislative sessions vs. biennial sessions (both states are currently on biennial sessions), differences in tax structures, regulations and incentives on oil and gas development and on how each state invests in infrastructure.

Sidney Representative Joel Krautter worked to organize the meeting, citing the need to get to know who North Dakota's legislators were on the other side of the state line from Sidney. "Many of the issues we face, whether on challenges to agriculture, oil and gas development, or fighting crime and drugs, don't start and stop at the state line, so it's always worthwhile to look at ways we can work together," said Krautter.

Representative Keith Kempenich, Bowman, said a benefit of better relationships between legislators from both states can be when there's a need to get attention on an issue affecting both states from a federal agency.

The legislators are hoping to meet again in the summer to continue discussions.