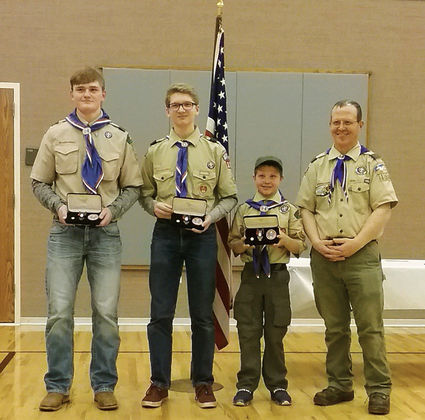 Four young men were awarded the rank of Eagle Scout Wednesday night, Dec. 18, at the year-end court of honor for Sidney Troop 190, sponsored by the Sidney Ward of the Church of Jesus Christ of Latter-Day Saints. The four young men are Daniel Stevens, Easton Hopes, Gordon Knapp, and James Allen.

Daniel Stevens is the fifth child in his family, all of whom achieved the rank of Eagle Scout, as did their father, Bart. For his project, Daniel restored and refreshed the recycle sheds in Sidney. He organized a labor contingent of youth and adults to scrape and sand paint, replace wood, and then repaint each shed. These recycle sheds support Richland Opportunities Inc., a county organization that assists those with life challenges in achieving self-reliance.

Easton Hopes has been in Troop 190 since 2014 and attends Fairview High School. For his Eagle project, he collected donations of materials and organized construction and safety experts in the building of planter boxes for Fairview school gardening projects.

James Allen, the oldest of the four boys honored Wednesday night, completed a project for the Montana Department of Fish, Wildlife & Parks. James developed and built bat boxes and placed them in strategic areas at the Department's request to house bats as natural mosquito control.

Sidney troop 190 chartered with the Boy Scouts of America in 1966 as young men's activity program for The Church of Jesus Christ of Latter-Day Saints. Troop 190 has held tightly to the scouting values of the Boy Scout Law and Oath. The current scoutmaster, Joseph Knapp, who earned the rank of Eagle as a young man in Idaho, reported that in the past few years, 12 young men have earned their Eagle ranks. Three others who have since moved out of state, but were previously involved in Troop 190, have also earned their Eagle ranks and another five are within a year of doing so.

The Boy Scouts of America has played a vital role in the development of youth leadership since its formation in 1910. It has enjoyed a long and mutually beneficial relationship with the Church of Jesus Christ of Latter-Day Saints. The church announced 18 months ago that due to its growing worldwide membership, a new youth program would be implemented in January 2020 to meet the needs of church youth worldwide. Consequently, Sidney Troop 190 will officially retire its troop number and will not re-charter in 2020. Some of the current Troop 190 scouts will join with other BSA troops in the area. Troop 190 wishes to express a heartfelt thank you to all of its leaders throughout the years and to the communities in Richland, Roosevelt, McKenzie, and Williams counties for their support, projects, donations, and help.