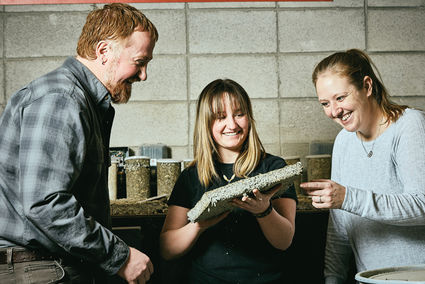 Drew McNally, center, along with her faculty advisor, Kirsten Matteson, right, and project partner Kirby Hancock look at a sample of hempcrete, a building material made mostly of byproduct hemp stalks. (MSU Photo by Adrian Sanchez-Gonzalez)

BOZEMAN - The leftovers of the tall industrial hemp plant often languish on Montana farms because they're difficult to till back into fields or otherwise dispose of. But it's because those stalks are so tough and woody that this agricultural byproduct is finding a new purpose in a lab at Montana State University.

"It doesn't really flow like normal concrete," said McNally as she explained how she tamped the material into forms to make standardized cylinders for testing. The material is relatively lightweight and could be used to provide insulation and structure in walls, she said.

"I really like the hands-on side of it, seeing how each of the different mixes perform," said McNally, whose involvement is funded by MSU's Undergraduate Scholars Program.

The team, which includes Michael Berry, associate professor of civil engineering, will also measure the insulating properties of the different hempcrete mixes. "As far as we know, this hasn't been done yet for hempcrete," said Matteson, who has years of experience in materials testing and is leading the project.

"We're always exploring possible uses for what would otherwise be waste materials," said Matteson, who is also studying new applications for recycled plastics in plastic-aluminum composite beams. "When we use waste materials in these applications, we often sacrifice some strength, but that's OK if we get other properties that are desirable."

The results of the project could help builders fine-tune their mixing of the material as well as provide data necessary for building officials to approve its use in structures, according to Kirby Hancock, Constructive Solutions lead architect at the design-build firm, who approached MSU with the research idea and secured funding from the multi-state Farmers Union Enterprises to cover the project's material costs.

"I think there's a lot of potential for this material, which is why I'm excited about it," said Hancock, who earned his bachelor's degree in environmental design and master's in architecture at MSU.

According to Hancock, hempcrete is commonly used in many parts of the world, especially Europe and Asia, and is sought-after by those trying to minimize their environmental impact - the material is made mostly of the crop byproduct and requires little energy input. Hempcrete is also valued for its resistance to fire, mold and pests, and as a more natural alternative to foam-based insulation, he said. It is typically packed into wall spaces between wooden members to create a solid, insulating panel, but the MSU research could lead to other construction applications.

The 2018 Farm Bill legalized hemp cultivation in the U.S., and last year, 209 licensed growers in Montana planted 50,000 acres of the crop, more than double the amount of the previous year. Industrial hemp is regulated to ensure the plants have minimal THC, the active ingredient in cannabis. Most hemp is grown for its CBD, a compound touted for its medicinal properties, or for hempseed oil used in food and cosmetics. 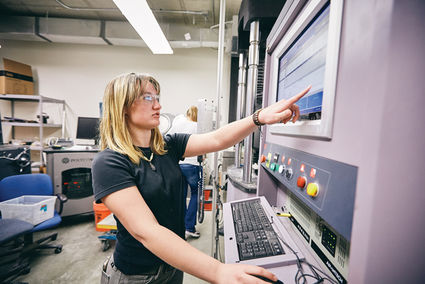 McNally surveys data collected during a structural test of a hempcrete sample in an MSU materials lab. (MSU Photo by Adrian Sanchez-Gonzalez)

Once the seeds and flowering parts of the plant are harvested, the remaining stalks are problematic for many growers, said Justin Loch, Montana Farmers Union director. "It just sits there and farmers have to figure out what to do with it - bale it and use it as animal bedding, or even burn it," he said. "Being able to use the whole plant would mean more revenue and more markets for growers."

McNally will present initial findings from the study at the 2020 National Conference on Undergraduate Research, which MSU will host on March 26-28. She said she appreciates applying what she has learned in her classes to a real-world problem. "I like working on something that can have a positive impact," she said.