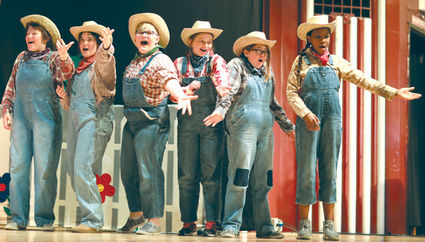 The Missoula Children's Theatre was in town for all of last week. Sixty Sidney youth were cast between grades K-12 for their role in "Jack & the Beanstalk." Performances were held Friday evening and Saturday afternoon at Sidney Middle School. Preparing for the shows required coordination, cooperation, and determination from everyone involved. They had to learn the ins and outs of their role in short order, including their script.

There were smiles and laughs from all corners of the auditorium and the students seemed to gain a lot from the experience, to the delight of attendees. Cast member Annette Davis, who played the strong lady, said it was the role she most admired. When asked after Friday's show what she would do differently for Saturday's performance, she replied, "I will be funnier." As the students become more comfortable being in the spotlight, everything becomes more natural - valuable experiences for kids as they grow.

The Sidney Public Schools and Missoula Children's Theatre hope to follow up with another play next year.