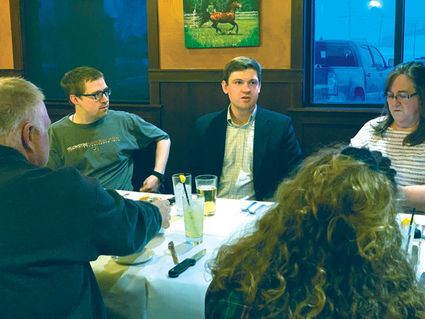 Graybill is a 5th generation Montanan from Great Falls and a skilled public attorney who has been at the forefront of some of the most high profile legal actions in the state in recent years. Graybill is Gov. Steve Bullock's Chief Legal Counsel and has led the governor's efforts to fight dark money in politics, protect public lands, defend workers' rights and our Montana Constitution.

"I want to reimagine what the office is about," stated Graybill. "The constitution framers intended the AG to be an independent voice. The attorney general is a check on power."

If elected, Graybill intends to take on many of the issues affecting the lives of every Montana resident. He wants to return the office to the role of being a counterbalance of government power & corporate actions that negatively affect residents. He feels he is uniquely suited to take on this task because of his experience challenging, and winning, high profile cases as Gov. Bullock's Chief Legal Counsel. One example of this is the case involving dark money reporting and the IRS.

Graybill's top priorities in office will be addressing healthcare costs, telecom & broadband access & cost and farm & ranch monopolies. "A one man shop with the law on their side can accomplish a lot. I'm someone that's been there," he said. "If officials are not fighting for you, then the people are not getting their money's worth."