An Insecticide Will Probably Be Needed To Reduce Potential Yield Loss 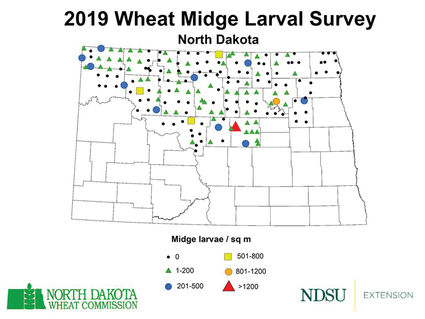 A total of 1,900 soil samples were collected from 20 counties in the fall of 2019 to estimate the statewide risk for wheat midge in the 2020 field season. The distribution of wheat midge is based on unparasitized cocoons found in the soil samples.

"About 1% of the soil samples had very high population densities of wheat midge (greater than 800 midge larvae per square meter) this past year," Knodel says. "The hot spots were located in west central Wells County and southwestern Ramsey County."

Another 2% was at a high-risk level (501 - 800 midge larvae per square meter) in northeastern Bottineau County, central Mountrail County and northeastern McLean County.

"These populations are high and indicate that an insecticide will probably be needed to reduce potential yield loss from wheat midge, assuming wheat is in the susceptible growth stages during midge emergence and midge populations are at economic threshold levels during field scouting," Knodel notes.

Scouting for wheat midge adults during emergence is a good integrated pest management, especially if wheat fields are in the susceptible crop stage, heading to early flowering (less than 50% flowering). Scouting for the orange adult flies is conducted at night when temperatures are greater than 59 F and the winds are less than 6 mph.

"Use a flashlight and slowly scan the heads of wheat plants for wheat midge adults, counting the number of flies per head," Knodel says.

The moderate risk level (201 - 500 midge larvae per square meter) also was observed in 5% of the samples. Moderate risk areas were scattered in eight counties throughout the state, including the northeastern area (Nelson County), the central area (Sheridan and Wells counties), the north-central area (McHenry and Rolette counties), and the northwestern area (Divide, Mountrail, Williams counties).

Larvae are susceptible to dryness and require rain to emerge from the soil in late June through mid-July, and to drop out of the wheat heads and dig into the soil to overwinter as cocoons. 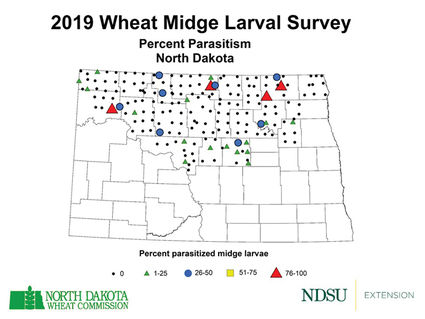