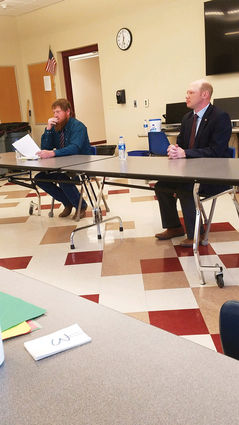 House District 35 candidates Brandon Ler and Joel Krautter discussed their differences on issues during a Candidate Forum on Thursday, May 14. (Photo by Bill Vander Weele)

House District 35 candidates Joel Krautter and Brandon Ler discussed their differences on issues during a forum sponsored by the Sidney Area Chamber of Commerce and Agriculture along with the Richland County Farm Bureau on Thursday, May 14.

Medicaid Expansion, the Solutions Caucus and the economy were among the topics of the candidates' forum between the two Republicans. Mail-in ballots for the primary election must be postmarked by May 26.

Ler said he doesn't believe that Krautter has done a good job representing Richland County in Helena. He noted Krautter, a first-term legislator, voted in favor of Medicaid Expansion which Ler said cost $1.4 billion and increased the hospital bed tax.

Krautter noted that the bill was supported by Sidney Health Center. He said that federal funds covered 90% of the costs. "It is important to keep our rural hospitals open," Krautter said.

Regarding the Solutions Caucus, Krautter said he is a proud member of the Conservative Solutions Caucus. He said that group's legislators get things done for the people that elected them. "I'm glad to work with any partner that has those beliefs," he added.

Ler noted that Krautter voted with Democrats on 213 votes. "We need an united Republican party," Ler said. "How can you say you're conservative when you vote with Democrats to raise taxes?"

Krautter argued that because Republicans are in control of the House, all of those bills passed Republican-controlled committees.

As far as the issue of school choice, Ler feels every parent has the right to send their child to the school of their choice. "We're all still paying property taxes for these schools."

Krautter said that he is a strong supporter of rural public schools and doesn't want to support any bill that could take money away from these schools. "We have to fight for our teachers and our schools."

The candidates agreed that tax revenue from oil and gas production needs to remain in Eastern Montana.

Krautter pointed out that he received support from Western Montana legislators in order to pass an oil revenue bill that benefited our area. "It takes relationships to get this done and to protect the gains we've already made," he added.

Ler said a unified front from Eastern Montana is vital. "We're the ones dealing with the infrastructure problems and the crime rate. The biggest issue is to stay united."

As far as improving the economy, Ler said cutting taxes for business owners and residents is a key. "Every dollar spent here turns over multiple times," the Sidney native added. He said Montana's residents are overtaxed.

Krautter said his "catch and keep Montana treasures act," sought to bring professionals and skilled workers back to Montana by using incentives.

Ler doesn't feel we should pay to have people move here. "Are these people really invested in our community?" he asked.

Regarding how they would work with Democrats at the legislature, Ler explained that he is a life-long Republican and will vote for Republican-content bills. "I'm not willing to cross the line into their lane," Ler said of Democrats.

Krautter said he believes in leadership that brings people together. He said he co-sponsored bills with Democrats that dealt with mental health/depression and drug price transparency.

In his closing comments, Ler said that he works in agriculture every day and is a small businessman. He wants to work to make sure that our residents have the best opportunity to make a living in the land that they love. Ler said more boots and blue jeans are needed in Helena.

Krautter said he is a common sense conservative who is a problem solver. He asked voters to look of the people who support him including area leaders, Montana Farm Bureau, the Montana Chamber of Commerce and Montana Family Foundation. He noted that out-of-town politicians and their "local pawns" are attacking him because he voted for what was best for Richland County not Helena insiders. "I represent you, not them." He said he worked with local government leaders, schools, hospitals, businesses and farmers/ranchers to solve problems for Richland County. "I had your back in Helena, and I need you to have my back against these attacks with your vote so I can keep fighting for you."