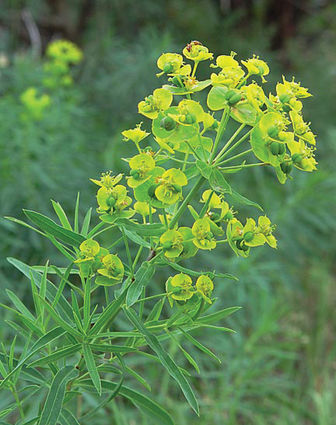 Leafy spurge is the most recognized noxious weed in North Dakota. (NDSU photo)

Yellow patches of leafy spurge are beginning to pop up in road ditches across North Dakota.

"Canada thistle tops the state at over 800,000 acres, with absinth wormwood the third most common at over 600,000 acres," she adds. "These species are the most common noxious weeds found on rangeland and pastures across the state."

Ranchers and county weed boards throughout the state work tirelessly during the summer to control these weeds.

"A number of methods of control are available, including chemical and biological control," says Kevin Sedivec, NDSU Extension rangeland management specialist. "The right option for you will depend on your location and management goals."

Here are some suggestions from the Extension specialists:

Successful chemical control of leafy spurge is dependent on the proper timing of the application and the herbicide used. Leafy spurge is most susceptible to chemicals when in the true flower stage, or when it is in bloom and seeds are developing, typically in mid-June, or when the stems develop regrowth in early to mid-September.

A number of chemicals can control leafy spurge effectively, but none can eliminate it on rangeland, pasture, Conservation Reserve Program land and roadsides. The best chemical options include Tordon (picloram), Tordon plus 2,4-D and Plateau (imazapic - fall application only).

The most effective treatment based on research conducted at NDSU is a combination of Tordon plus Plateau plus 2,4-D plus MSO adjuvant applied when plants are in the true flower stage (in mid to late June). The combination of Facet L plus Overdrive plus MSO adjuvant also has proven to be an effective chemical combination for leafy spurge control, and it can be used near trees and in areas with sandy soils/high water tables. Refer to the "North Dakota Weed Control Guide" (https://tinyurl.com/NDWeedControlGuide-2020) for recommended rates and guidelines.

Grazing with sheep or goats is the best biological control for leafy spurge because cattle's use of leafy spurge is limited. However, livestock that graze on leafy spurge often experience photosensitivity due to the chemicals in the plant.

Flea beetles are another effective biological control option for leafy spurge; however, they are not well adapted for sites with sandy soil conditions.

Chemical application offers the greatest control of Canada thistle. Chemicals are most effective when applied at the early bud stage in early summer or at the rosette stage in the fall. Chemicals recommended for use in rangeland and pasture include Tordon (picloram), Banvil (dicamba), dicamba plus diflufenzopyr (Overdrive), Milestone (aminopyralid) and Curtail (clopyralid).

Two new herbicide treatments are Grazonnext HL (Triisopropanolammonium plus aminopyralid plus 2,4-D) and DuraCor (florpyrauxifen-benzyl plus aminopyralid). Both show excellent control of Canada thistle plus other common weeds.

At this time, chemical control is the only option available to treat absinth wormwood. Herbicides should be applied when the plant is 1 foot tall and actively growing. Application early in the growing season typically results in poor control.

"Whenever using a herbicide, always read and follow the label directions," Sedivec advises. "Roundup is a nonselective herbicide and will damage or kill all vegetation on which it's applied."

For more information on weed control, consult the "2020 North Dakota Weed Control Guide," which is available at NDSU Extension's county offices or online.