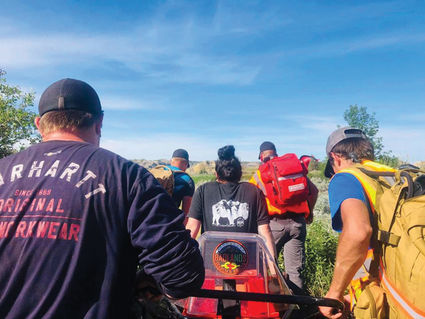 At 3:43 PM, BSAR was contacted directly for an injured hiker on the Long X Trail in McKenzie County on the Little Missouri National Grasslands.

The hiker was reported to be approximately 3 miles in from the trailhead at the CCC Campground and had suffered a sprained ankle and was trying to limp out under her own power but was in pain and moving very slowly.

The US Forest Service-McKenzie Ranger District was notified by BSAR and advised that their law enforcement ranger was out of position and for BSAR to proceed on to assist and aid the injured person.

North Dakota State Radio was notified of the incident as well and kept apprised of details as they developed.

BSAR responded with three members and the wheeled litter and those personnel hiked in with the litter at 4:46PM and linked up with the injured party and her friends approximately 2.5 miles down the trail at 5:32PM. 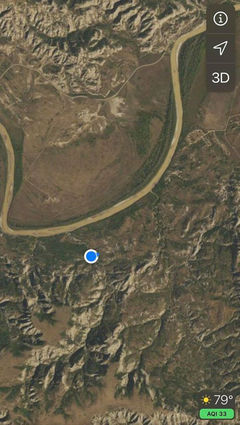 Approximate location of the injured hiker before BSAR's arrival.

The injury was assessed and stabilized with a SAM splint and bandage and the patient was then loaded onto the wheeled litter and carried out by three BSAR members and one friend.

The hiker and crew arrived back at the trailhead at 6:50PM with the injured party declining further medical treatment from EMS and given a ride home with a friend to continue self care or seek medical treatment on her own accord.

The hikers did everything correct in this case. They knew where they were, called for help, were prepared with ample water and food, and knowledge of their location. This culminated into an easily deployed SAR team with the necessary equipment and personnel to aid the injured.

All personnel were clear from the location by 7PM.

Total time: 3 hrs and 13 mins. (From initial call to clearing from trailhead.)