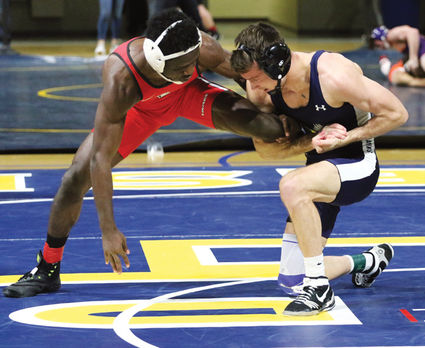 Sidney native Gresh Jones has definitely made a name for himself for his wrestling achievements.

After being a four-time state high school champion in Sidney, Jones was a four-time national meet qualifier at Dickinson State University.

The honors earned Jones selection as one of this year's finalists for the Montana Little Sullivan Award, which is given to the state's top amateur athlete. Because of coronavirus concerns, it's still hasn't been determined when the award ceremony will take place.

"It's quite an honor to be a finalist for Little Sullivan," Jones said.

He remembers when he was younger that he admired Little Sullivan selections. "My goal was to always be the best athlete that I could be and I felt that other things would come from doing that."

His collegiate career included placing third as a junior and fourth as a sophomore at the NAIA national meet. He earned the regional championship once and placed second three times. His career collegiate record was an impressive 77-19.

He has always been proud of being a wrestler from Sidney.

Jones will student teach at Dickinson High School this fall to complete his studies for being a physical education teacher. He will also serve as a graduate assistant coach for Dickinson State University this year.

"I will probably be coaching and teaching for the rest of my life," Jones said. "It's something that I'm looking forward to."