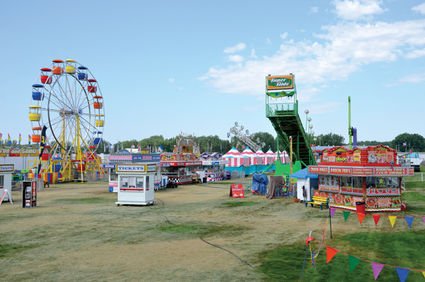 Fair Board member Chris Hillesland noted that logistics and health concerns were major reasons for the decision.

Hillesland said board members had concerns that the high attendance at the fair could spread Coronavirus. "If that happened, it would put the school board in a tough position to reopen school this fall." He also mentioned that a large spread could result in the shutting down of businesses again.

Hillesland noted the cleaning crew canceled their plans to work during the fair. He said it's a big job to keep the restrooms clean.

Fair officials said that holding the concert and rodeo while having to follow social distancing requirements would result in a loss of almost $100,000.

"It was a real tough decision," Fair board member Tami Christensen said.

Public comment included statements about health and also the challenges that some non-profit groups could have running food booths without elderly people assisting as much as usual. On the other side, residents expressed that America is about personal choice and freedom. Comments included "This is America, and we need to get over this," "I don't want to live in fear," and "It's time to do business as usual."

4-H leaders and volunteers urged commissioners to allow at least a 4-H Fair. Extension Agent Josie Evenson said that 4-H includes 453 students and 120 adult volunteers this year. She noted that students need to learn by doing. "We're raising kids for the future," she said.

4-H member Sarah Helmuth said a lot has been taken from senior students this year including athletic seasons and a traditional graduation ceremony. Being at home during the shutdown, students spent more time with their animals than before. She urged commissioners to allow a 4-H only fair.

Commissioner Shane Gorder made the motion to cancel the fair due to the uncertainties the county can not meet to have a safe fair. The motion included having a 4-H only fair. Commissioner Loren Young seconded the motion that passed 2-1.

Gorder said commissioners heard the opinion of many residents. With anticipated attendance of 30,000, Gorder feels maintaining recommended health guidelines would be difficult. He wouldn't want to overburden Sidney Health Center and schools if an outbreak occurred. Gorder said he was elected to do what's right for taxpayers. Reasons for his decision included health issues, law enforcement, finances, cleaning and the elderly.

Young noted the increase of cases throughout Montana played a role in his decision. He said he wants a fair, but he isn't smarter than health officials.

Commissioner Duane Mitchell, who voted against the motion, noted that more people get killed in traffic accidents than by the virus. "It's just a fictional number," Mitchell said of Coronavirus. "We're just a bunch of sheep if we don't let this happen. I understand you don't have a cleaning crew, because they bought into these numbers."

The County Commissioners received a recommendation from the County Fair & Rodeo Board to cancel the 2020 fair and rodeo because of coronavirus and COVID-19. The Commissioners gave notice of a public meeting to consider the recommendation and invite public comment and citizen participation in the decision.

This would have been the Centennial year of the Richland County Fair & Rodeo. For 100 years it has had tremendous importance to thousands of people because of its many different components. For as long as they could, county personnel did all they could to maintain this valuable tradition by having the fair and making it as safe as reasonably possible.

Recent events have shown that holding the fair would be either impossible or unreasonably difficult because of the higher and irresistible force of the COVID-19 pandemic, and after trying everything it could, the county could not overcome the effects of the pandemic.

For many years, the fair has contracted with outside services to clean and sanitize the grounds, buildings, and facilities because the county did not have enough of its own personnel for those responsibilities. The contractor for this year recently notified the county that, because of COVID-19, it could not perform its contract. In the time that remains, the county could not make other adequate arrangements. Without cleaning and sanitization, the county cannot comply with government health restrictions and standards.

Recent large events at the fairgrounds have shown that social distancing and other guidelines remain a serious challenge. The Sheriff of Richland County expressed concerns about the ability of his Office to enforce guidelines that had been developed to try to hold the fair safely.

Schools are scheduled to open two weeks after the fair. If the fair were to cause an outbreak of worsening pandemic at that time, the mistake could have a cascading effect on schools and the education of our children.

Recent information about decisions the Governor of Montana will be making has made it uncertain what phase of gubernatorial restrictions would be in place at fair time.

After holding out as long as we could and trying everything we could to hold the fair, we reached a time when we had to decide. Our decision is to cancel this year’s fair.

As an exception to the cancellation, the Richland County 4-H Youth will be able to have their events and livestock sale with attendance limited to family and auction bidders. This is in accord with the recommendation of the fair board and public comments.

The fair board, manager, commissioners, and fair employees thank you for your patience and understanding with our attempts to hold the fair and eventual decision that we must cancel it.