To Gather, Or Not To Gather? Different Counties Take Different Approaches. 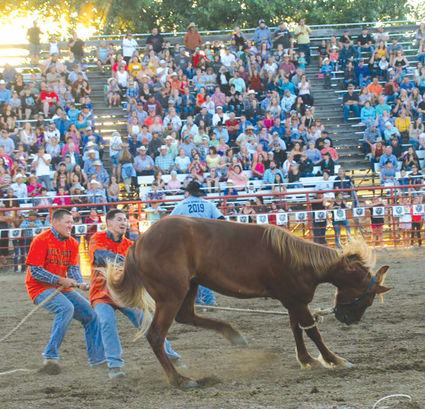 As Montanans continue to gather in large groups, leading to the spread of the coronavirus, some counties are allowing such gatherings, while others are taking steps to further regulate them.

In Roosevelt County, the four-day Wolf Point Wild Horse Stampede rodeo illustrates the enforcement limits of Gov. Steve Bullock's phased reopening plan, but also shows the role that local health officials have in enacting - or not - public health mandates to try to limit the spread of COVID-19.

This year's rodeo gets underway as Montana begins to see an increase in coronavirus cases tied to group gatherings, leading at least one county to restrict group gathering size. During a press conference Tuesday, Gov. Steve Bullock said multiple new cases had been tied to six wedding celebrations in recent weeks.

While the second and currently in-effect phase of the state's three-phase reopening plan recommends against group gatherings of more than 50 that don't allow for physical distancing measures, that is not an enforceable order, Bullock spokeswoman Erin Loranger said late last week.

So Bullock has said he's relying on Montanans to voluntarily follow the plan's guidelines and other public health recommendations, like wearing a mask in public, rather than instituting mandates.

"We're not all taking the steps that we should in larger gatherings," he said of Montana residents.

Counties, however, can enact stricter measures if they choose to, Loranger said. One county that is enacting its own restrictions is Lewis and Clark County, where testing has confirmed a cumulative 40 cases, with 23 active cases as of July 9. County public health officials said Tuesday they have banned gatherings of more than 250 and are allowing gatherings of between 50 and 249 if they meet certain requirements.

Organizers for permitted gatherings will have to submit a "detailed plan" specifying prevention measures to reduce the risk of transmission. Any event of that size would also have to maintain 6 feet of distance between groups of family members. The county cited state statute that allows public health officers to enact such an order.

"We continue to have event organizers moving forward with large events despite public health [recommendations] advising against it," Lewis and Clark Public Health Officer Drenda Niemann said in a press release announcing the restriction. "We asked residents to do the right thing and limit or cancel their events, and we haven't seen that happen; therefore, we have to move to the next step and put an enforcement tool in place."

Enforcement of the order will be a "complaint driven process," with local law enforcement documenting violations and referring them to the county attorney for potential misdemeanor charges. Those convicted could face up to 90 days in jail or up to a $500 fine for each violation.

But in Roosevelt County, County Attorney Austin Knudsen said he told county officials he believed they don't have authority to issue health regulations or prohibit the Wolf Point rodeo because the event takes place on private property. Knudsen is running for state attorney general as a Republican against Democrat Raph Graybill.

The Wolf Point Chamber of Commerce, which produces the event, did not respond to interview requests.

Roosevelt County has so far largely been spared by the virus. As of Thursday morning, officials have confirmed seven cases in the county, but no active cases.

In an interview, Knudsen said that since rodeo events aren't taking place on public property, the county doesn't have authority to enforce public health mandates. Had the rodeo been planned for county property, his analysis would have been different, he said.

"The stampede committee presented their guidelines for complying with Gov. Bullock's COVID-19 directives to the satisfaction of the county commissioners and the county health board. My position was that the county didn't really have any authority here to say yes or no," he said. "My attitude and my legal opinion has been we still have the First Amendment, which says you have the right to peaceably assemble, period. It doesn't say you have the right to peaceably assemble unless we were afraid someone's going to get sick."

A larger concern for Knudsen, he said, is social distancing recommendations being disregarded outside of the rodeo at places including local bars, where law enforcement could issue citations.

Organizers also cancelled most auxiliary events tied to the rodeo, including a carnival, parade and street dances. Knudsen said that decision came last week after a meeting between county officials, tribal leaders and organizers after concerns were raised about the difficulty of maintaining social distancing during those events.

Fort Peck Assiniboine and Sioux tribal leaders had initially raised concerns that organizers hadn't met with them to discuss holding the event this year, which they opposed on the basis of the dangers the virus poses to tribal citizens, especially because hundreds of contestants were expected.

Rodeo contestants, many of whom will be coming from other states, also won't be allowed to mingle with attendees and will be limited to their own area of the rodeo grounds, Knudsen and Presser said.

"They were able to get the tribe[s] on board ... And that was the biggest concern," Knudsen said. "They had some serious concerns about bringing people into the area. And certainly that's justifiable."

Throughout the planning process, Presser said, organizers met with county and tribal officials to design an event that everyone could support. And despite the precautions that have been put in place, she said, it's not possible to know how effective they'll ultimately be.

Still, Fort Peck Reservation leaders say they're not taking any chances. In a late-June resolution, the Fort Peck Tribal Executive Board said it will not allow tribal departments and programs to participate in the event this year, and leaders have asked tribal members to not attend.

Indigenous people face greater risk of serious complications from the virus because of high rates of preexisting health problems like diabetes and housing situations that often include several generations of a family living together. In Montana, Native Americans have been infected, hospitalized and died from complications of the virus at disproportionate rates, according to the most recent state analysis.

"We have no active cases," said Fort Peck Tribal Executive Board member Kaci Wallette at a State-Tribal Relations Interim Committee late last month. "But we know the cowboys are ... coming from states that do have cases and big outbreaks."