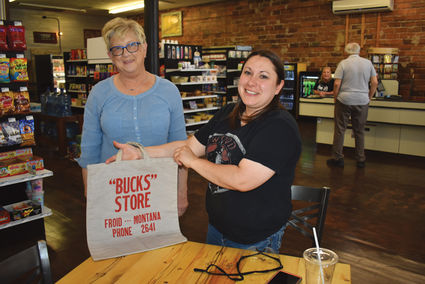 When the corona virus hit Montana and non-essential businesses closed, Misty Williams, Froid Grocery store owner, Froid, took the radical step of closing the front door of her "essential business," restricting it to phone and Facebook orders and curbside pickup.

Williams says, "When the virus hit, people were understandably reluctant to go out. The governor had shut down the state and there was a virus case in town. So, we came up with a plan to minimize contact and protect both customers and employees."

Instead of shopping the aisles in person, customers "virtually shopped" by looking at photos of the shelves on the grocery's Facebook page. Williams says the results were astounding as orders increased fivefold. In another bold move Williams completely closed the store for three weeks for an update. Professionals and community volunteers worked to refinish the building's original wood floors and brick wall, update old walls, replace, paint and install new shelves, redecorate, and create an inviting new sit-down area for coffee, soda and snacks.

Since it began in1910, Froid's small farming/ranching community has seen businesses come and go. The first grocery, Perlin's Grocery, was built on Main Street in 1928 after fire destroyed the original 1911 building that in years passed had a hardware store, several bars, and pool halls. After Perlin's was sold to Buck and Irene Ryder in 1937, it was renamed Buck's Store. In 1977, Ron and Frances Hippe bought the store. However, in 1989 it closed and the town was without a grocery store.

In 1990, the Froid Community Corporation, with the backing of townspeople, stepped in to resurrect the store through fundraisers, grants, and selling coop shares. Pat and Judy Waters who managed the store later bought it in 1993. In 2003, they sold it to Judy Smith who Williams bought the store from in 2012.

As to why she decided to buy the store Williams says, "I was working for Halliburton in Williston. I loved my job but not the daily drive with stops in Trenton for my kids' childcare. I love working with people and wanted to keep the grocery going for the town-getting involved with the store allowed me to be with my kids, quit the travel, and help the town."

She had worked as a supervisor for Albertson's, responsible for "front end" operations, dealing with the customer experience and security. Store ownership brought new responsibilities such as inventory management, pricing, and marketing. Williams invested in equipment updates; new produce and meat cases, a beer and wine license and converting to a new price scan and check out system. When the bills were paid however, the goal of updating the store went on hold. But the dream stayed alive as she bought stain for the wood floor and shelving from a closing Shopko for the day the renovation could happen.

When the virus struck, the store was at a tipping point. Online shopping and big box stores had cut into business. In addition, new realities of oil field workers leaving the area and senior citizens, the long-time bakers and cooks who patronized the store, moving to retirement and nursing facilities, hurt sales. Williams discussed the store's future with close friends. She says, "As the virus took hold, sales increased and customers depended more on Froid Grocery. We learned more about their wants and needs and customized service accordingly. It pumped up my confidence and hope."

The update is not finished and more funds are needed. In March, the store offered a few free will meals, which the town readily supported. As awareness grew funds came in to pay for freezers and milk cooler. Williams's future improvements include air conditioning, another freezer, a new front window and electrical work. The price tag is in the thousands but within reach.

On June 25, at the store's Grand Reopening, Williams guesses about 250 customers walked through the newly renovated store, exclaiming over the transformation and enjoying slushburgers "on the house." Neighbors sat in the new coffee/soda bar area, with its reclaimed barnwood top tables and counter crafted by local wood and metal artisan Dana Strandlund.

Williams's updates include a new fountain soda machine and Taco Thursday lunches that are attracting customers, including the train crew that travels through Froid weekly. In August, when school restarts, Williams will change the store hours to open at 7:30 a.m. so school bus drivers can sit down with coffee and donuts.

Williams, who was thrilled with the response to the Grand Reopening says, "I loved seeing the looks on customers' faces and hearing their comments as they came through the store and saw the changes." The update comes with a deep investment of hard work, resources, and courage in challenging and unpredictable times. 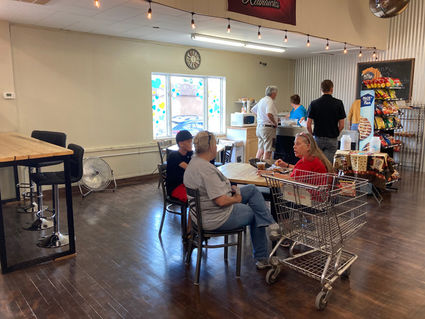 Froid Mayor Sheri Crain says, "Misty and her staff are a wonderful asset and 'essential service' to our town in this crisis and in the years past. Froid Grocery is at the heart of our small town, and supporting it is an essential part of keeping our community vibrant.

The challenges of COVID-19 and William's unorthodox response were a game changer for Froid. It opened the door to opportunity and change for Froid Grocery and Misty Williams, and gave folks a reason to be proud and hopeful.