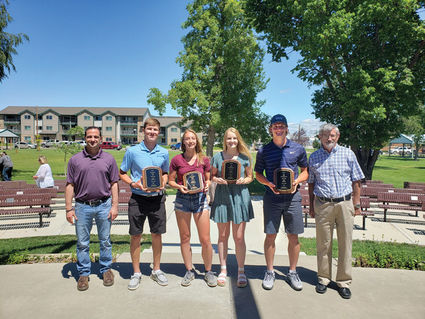 Receiving the Athlete of the Year honors were Fairview's Alex Schriver and Savage's Haylie Conradsen.

Schriver was one of the top athletes in the state for football, basketball and golf during his career. He earned All-State honors in both basketball and football for the Fairview Warriors and was voted to the 8-man All-Star football game. Schriver was involved in eight touchdowns and intercepted three passes in the state championship game win over Alberton-Superior. Schriver was voted the MVP of the District 2C basketball tournament as a senior. The Warriors went on to share the state championship in basketball. Schriver placed 11th, second and fifth at the Class C state golf tournament during his first three high school season.

Conradsen earned All-State honors in basketball and volleyball during her career in Savage. She was a member of two teams that qualified for the state basketball tournament and was selected to the All-State Tournament Team as a junior. As a track athlete, Conradsen scored the most points for a girl during the District 2C track meet as a sophomore.

Asbeck excelled in football, basketball and track in Fairview. Asbeck earned All-State honors in both football and basketball. He was selected to play in the 8-man All-Star football game and East-West Shrine Football game. He started the state championship game by returning the opening kickoff for a touchdown in Fairview's 70-6 victory. He ended up the game with four touchdowns. Asbeck also received All-State honors in basketball where Fairview shared the state championship. He placed fifth in the triple jump at the state track meet.

Baxter has been a multi-sport athlete in Sidney. Baxter was a three-time All-State selection and a strong scorer for the Richland Rangers' hockey team. She was second in the state for goals scored and for overall points in her senior year. She ranked second in assists, third in goals and third in overall points as a sophomore. She was part of a state championship hockey team and played in a state softball tournament. She started for Sidney's volleyball team and competed in the javelin for Sidney's track squad.