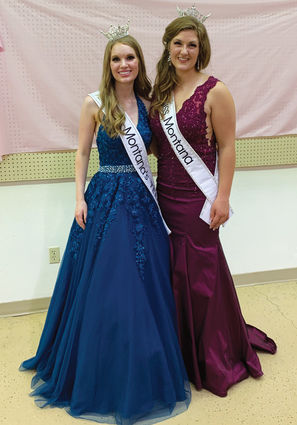 Annika with the newly crowned Miss Montana, Jessica Criss at the coronation after party on Saturday night. (Submitted photo)

Displaying her great ability of playing the violin and her intelligence in answering questions, Sidney's Annika Bennion was crowned Miss Montana Outstanding Teen in Glendive on Friday night.

The oldest daughter of Dr. Brett and Daniela Bennion also captured top honors for both talent and overall interview skills during the program.

"I also won people's choice," Annika said. "We had a lot of great contestants. I had a lot of people on Facebook congratulate me and being very encouraging to me."

"Looking back, I was a little shocked when they called my name," Annika said. "It really didn't sink in until the next morning."

She explained she didn't really take the time to consider how well she was doing compared to other contestants throughout the week.

"I just wanted to focus on my presentation and doing my best," she noted.

Annika's talent consisted of playing "Souvenir D'Amerique" by Henri Vieuxtemps on her violin.

"It went very well," she said. "I wanted a talent that was going to be really entertaining. It has a classical background but is more modern."

Annika described her eight-minute interview span with judges as one of her most fun times of the week. "They asked me about my platform and my violin," she added.

The title of her platform is "No NicoTeen." Her efforts against vaping started publicly last year when she won a mini-grant to fund a No Nicoteen American Billboard contest. She also stressed her viewpoints during school visits.

She notes that 30% of Montana's middle school and high school student vape. "Montana's rate of vaping is twice the national average," Annika said. "We've even got 9-10 year olds who are getting a hold of it from their parents."

She looks forward to speaking to more students in schools about the issue. Because of the Coronavirus outbreak, this year's Miss Montana Outstanding Teen will serve for both 2020 and 2021. "Once schools open, I have two years as Miss Teen Montana, so I will eventually get to speak in schools again."

Annika is thankful of the support from her parents. Her mother is a former Miss New Mexico USA. Annika noted that her 15-year-old sister and 13-year-old brother also played important roles while she was on stage. Bronte showed great emotion and was almost vibrating in her chair. Tarquin, meanwhile, tried to think like a judge and looked extremely serious.

"It was easy to keep a smile when I watched those two," Annika said.

She thanks her sponsors Oil Connect, Shiloh Medical Clinic, Blue Rock and the Boys & Girls Club of Richland County.