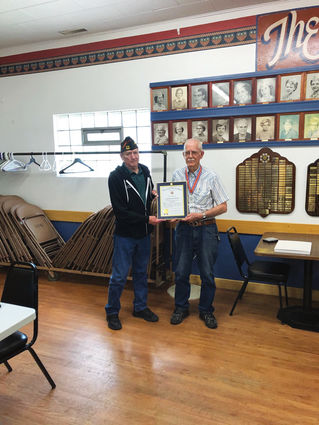 Larry joined the VFW in June of 1975. He was installed as Junior Vice Commander in 1981; Post Commander in 1982 and 1984 and District #5 Commander in 1985 plus three more times over the years. In 1984 he also received an appointment as Special Aide-De-Camp for the National Commander during his visit at Montana State Convention.

In 1990 he received an appointment for National Convention on National Finance and Internal Affairs Committee held in New Orleans, LA.

In 1993 he receive an appointment as a member for the National Community Activities Committee.

And in 1999 he received National Deputy Chief of the Staff for the 100th VFW Convention, Kansas City, MO.

He was Grand Hospital Chairman for 23 years and Grand Blood Chairman for 30 years. He has donated 104 pints of blood to the blood program.

Over the passing of our Pup Tent Quartermaster he assumed that position for a few years.

Over the 4 years as District #5 Commander, he spent many years, hours and miles attending all 10 Post's inspecting at their regular meetings and never missed any council meetings, usually held in Great Falls.

Over the last 40 years Larry has put in a lot of hours at the Sidney Post working in the kitchen at many functions and maintenance in the building and helping the manage with monthly inventory.

For several years he called Bingo every Wednesday night in the Post Hall.