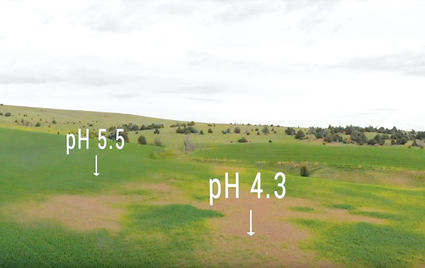 A new Montana State University video shows the impact and causes of soil acidification in Montana and offers management options to prevent, adapt to, or correct acidic soil. (Submitted photo)

Bozeman - A new video from Montana State University Extension shows the impact and causes of soil acidification and offers Montana farmers management options to prevent, adapt to or correct acidic soil, which can lead to heavy yield losses.

"Soil acidification is an emerging issue in Montana, where low soil pH has traditionally not been a concern," said Clain Jones, MSU Extension's soil fertility specialist and professor in the MSU College of Agriculture's Department of Land Resources and Environmental Sciences. Jones said soil pH levels low enough to harm crop growth have been found in 24 Montana counties.

The video was produced by Jones and Nate Kenney, a graduate student in MSU's Science and Natural History Filmmaking program in the School of Film and Photography. The video features Brent Hanford, from Fort Benton farmer collaborating with MSU scientists on this issue.

Acidity is measured on the pH scale, with numbers from 0-14, with lower numbers being more acidic. Jones said when pH drops below 6, legumes have trouble fixing nitrogen – which supports growth and development – and there is a change in herbicide action and how long herbicide residue stays in the soil. As pH goes below 5, aluminum that exists naturally in soil is released and can be taken up by plants, damaging crops.

Research by MSU Soils Professor Rick Engel, Jones and others indicates that ammonium fertilizers, including urea, are the major cause of soil acidification in agricultural soils. "Acidification can be hard to detect, since it can begin in a small area or be isolated to particular soil depths. That means that acidic soil can be hidden in standard soil test results," Jones said.

He added that soils tend to become acidic fairly quickly, even with the recommended levels of fertilizer use.

"This means it's not a question of if, but when, this problem will affect a specific, cropped and fertilized field," he said.

"Liming and manure applications are the primary long-term fixes for acidic soil," Jones said, "which will allow continued production of crops." When using spent sugar beet lime, this can cost around $100/acre because of hauling and application costs, for an approximately 15-20-year benefit. Based on his experience, Hanford said he strongly encourages farmers to use prevention practices to avoid the expense and task of liming and to avoid yield losses.

"Selecting crops that use less nitrogen, such as legumes, perennial grass and barley, and applying nitrogen fertilizer in ways that maximize the amount taken up by plants, can slow the downward pH slide," Jones said. He noted that some crops and varieties are more tolerant of low pH, and perennials may slowly increase soil pH.

The video is available to view at https://www.youtube.com/watch?v=cjWneDQVyV8&feature=youtu.be.

For additional information, visit http://landresources.montana.edu/soilfertility/acidif/index.html or contact Jones at [email protected] or 406-994-6076.