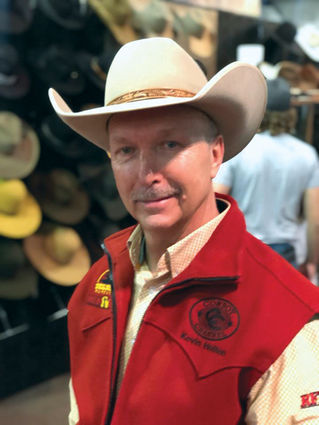 After years of working on his uncle's ranch in Wildrose, ND, Kevin Holten, Executive Producer of Special Cowboy Moments, knew that there was more to life than stacking and hauling tons of hay bales every summer. "I grew up in Wildrose, ND, and I started working on my uncle's ranch when I was eight years old, so I have done all of those not-so-fun jobs. I have hauled millions, I think, of bales in my day and it is probably stacking and hauling hay bales that prompted me to go to college because I decided I did not want to do that for the rest of my life," chuckled Holten.

So after graduating high school, Holten headed off to college at The University of North Dakota to pursue a bachelor's degree in journalism and visual design.

After obtaining his degree, Holten started working in the newspaper and publishing business and continued to work in that industry for six years; he also worked in magazine publishing for a little over 15 years. During this time, Holten was also following the rodeo circuit, riding saddle bronc. "There was a time where I was in the publishing business where I had a company-paid apartment in New York City, and I would travel the country a lot, and I might have an appointment with the corporate executive during the day dressed in a three-piece suit and then a ride and a rodeo that very same night," chuckled Holten.

Although Holten was busy writing and rodeoing, he never lost sight of the importance of preserving the rich history of the western way of life.

In 2017, Holten moved back to North Dakota and became the Executive Director of the North Dakota Cowboy Hall of Fame. "During my time as the Executive Director, I thought you know what we need to preserve this history. We need to start taping interviews because there are so many untold stories of the west, and we need to collect and document that history because we are losing more and more of it every day. So I started taping interviews on my own for a little bit, and then I went to NBC North Dakota, and I said this is the concept I have and I would like to turn this into a series to broadcast across the state of North Dakota on NBC Affiliates - so I did that for about 40 episodes, and then I took the show to RFD-TV, and they loved it, and we have been doing Special Cowboy Moments on RFD-TV and Wild Rides on the COWBOY CHANNEL ever since," added Holten.

When asked what inspired him to start the channel, he responded, "The inspiration goes way back to my early childhood when my grandfather, who grew up near Bristol, SD, moved to Wildrose, ND, and worked at the Heckman Ranch. Here they had 1000s of head of cattle and 100s of head of horses, and he would tell me many stories about his time at the ranch. And today nobody knows about the Heckman Ranch, although we did do an episode on that, nobody knew about the ranch, and I thought that was unfortunate that nobody knew about that history and that kind of sat in the back of my mind and so the goal in creating Special Cowboy Moments is to "gather rich history for generations to share," and it is all about not losing that history."

Through Special Cowboy Moments, Holten has captured many stories from people all over the world who live the "western way of life," including rodeo legends, ranchers, and cowboys. He has conducted interviews in many parts of the United States and has recently done interviews in Queensland, Australia. Holten said, "We get to meet a ton of interesting people, and we interview the top people in rodeo nationwide. We learn about how they became successful, and we have learned that almost every world champion at one point almost quit. So we discovered that perseverance is the biggest quality you have to have if you are going to be successful. The same goes for ranching - you really have to persevere; it is a tough life."

Holten explained that his job as Executive producer of Special Cowboy Moments is "extremely rewarding." "In the process of interviewing, it can become very emotional, and one second we can be in tears, and the next second we might be falling off our chairs laughing. These are great people, and I am convinced that we could interview everyone in America, and it would make a great TV show - because everyone is important and everyone has a story to tell," stated Holten.

Holten explained that viewers can sense that Special Cowboy Moments episodes are real and genuine history. He said, "Our shows will never go out of date - they are capsules in time. Teachers have even been using Special Cowboy Moments episodes in classrooms as learning lessons. We are teaching kids history, and that is a success in my book. Cowboy heritage and history is second to none, and we aim to gather that incredible history and preserve it for our future."