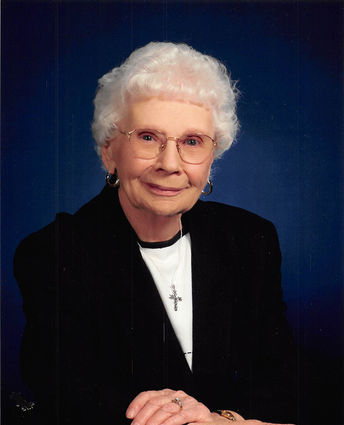 Funeral services for Roselyn Lueck, 103, of Fairview are at 10:00 A.M., Saturday, August 8, 2020, at the Trinity Lutheran Church in Sidney with Pastor Rolf Preus officiating. Interment will be in the Sidney Cemetery, Sidney, MT under the care of the Fulkerson-Stevenson Funeral Home of Sidney. Visitation will be on Friday, August 7, 2020, from 10 AM to 5 PM at the funeral home and one hour before service at the church. Remembrances, condolences and pictures may be shared with the family at http://www.fulkersons.com.

Roselyn Cecelia Weber was born on July 8, 1917 in Leonard, ND to Henry and Elsie Weber. She was a year old when the Spanish Flu pandemic started. She has been through two 100 year pandemics, but she did not pass from COVID 19.

Roselyn was named Rosaline, but the kids would tease her saying, "Rosaline, Rosaline, hanging from the clothesline!" She changed her name to Rosalyn when she was 5 years old.

She was the oldest of eight children, all are now deceased. They moved to Drake, ND where her father worked for the railroad. Her parents never owned a car. They traveled by train to visit relatives in Minnesota.

She met the love of her life, Ewald Lueck, at a house party in 1934, and they were married in Drake, ND in June of 1936. Roselyn worked as a trainee at the telephone office and at JC Penney, during the Christmas season for a while. She graduated from Drake High School in 1934. The rest of the time she worked on the farm.

The house on Ewald's farm burned down in 1934, so they lived in a two room granary after they were married. In 1938, they bought a farm near Drake and lived there until they moved to Montana in 1945. They bought the Cliff Ray farm on Mount Pleasant west of Sidney. They farmed there until 1971 when they sold the farm to Earnest Klasna. Anvick's bought the land and are farming it today.

Ewald and Roselyn bought a motorhome in 1972 and became snowbirds. For the next 18 years they spent their winters in Yuma, AZ, and Zepata, TX.

In 1977, they moved to Fairview, MT, then in May of 1994 Ewald passed away. Roselyn continued to live there until just a few years ago.

Roselyn was a very tough and gracious woman. She lived through some pretty tough times. She told us that at one time, during The Depression, stamps were 3 cents and they didn't have enough money to mail a letter.

Roselyn has survived surgery for knee replacement in her 90's, a broken hip, and just recently a broken femur, and over 100 years of the toiles of life itself.

Roselyn was a member of St. John's Lutheran Church in Fairview since 1978. She was very involved in the church and loved to sew blankets for the needy, hundreds of them. She attended service religiously. She has also given over 5 gallons of blood in her years.

On August 2, 2020, Roselyn passed away at Extended Care in Sidney, MT, reuniting her with her parents, all of her siblings, her daughters, and numerous nieces and nephews.

Roselyn in preceded in death by; her parents, Henry and Elsie Weber; her husband, Ewald; her siblings, Eldor, Elaine, Delores, Clarence, Shirley, Lucille, and Adrian; her daughters, Carol and Marlene; most of her friends; and her Lord and Savior.