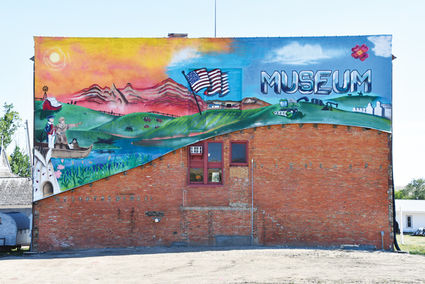 The Lewis and Clark Trail Museum, Alexander, has been adding more and more to the grounds, and now they have a brand new painted wall that depicts a colorful timeline of the area.

The mural is located on the north wall of the museum. It includes paintings of Lewis and Clark, Sakakawea, and Lewis' dog, Seaman, on the Little Missouri River, a tipi, an old homestead, barn and windmill, a prairie rose, the Badlands, bison, an oil well pump jack, combine, grain elevators, and some horses and cowboys.

"One of the things I think is really cool about the mural is that there is an American flag painted on the window, which is on the top level, and at night it lights up so that everyone is able to see the bright colors," said Cathy White, Lewis and Clark Trail Museum director.

The artwork was done by a local artist, James Griffin. White added, "He has his own company called, Griffin Artwork and Custom Designs; he is a very talented artist!"

The Lewis and Clark Trail Museum Board of Directors decided to add a colorful mural to the museum to draw people's attention to it. White said, "The board wanted to incorporate something that would add some color to the museum, and we thought that a mural would be a great idea. We also wanted it to follow a timeline from the early settlers to the current day and the artist did a great job incorporating all of that into the mural. In the future, visitors will also be able to see a pollinating garden along with eleven crops."