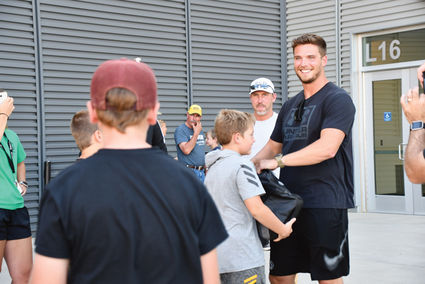 Garrett Sickels signs autographs after his talk at the Rough Rider Center.

Sickels chose to retire from the NFL after suffering repeated back injuries. He shared his inspiring story of attending Penn State and eventually moving on to the NFL. Sickels played outside linebacker for the Los Angeles Rams and Washington Redskins before his retirement.

Sickels shared his top five motto for success in both sports and life in general. 1) Positive attitude. 2) Compete in everything you do. 3) Hard work ethic. 4) Be willing to sacrifice. 5) Don't ever take a single play off, avoid slacking.