Hunting: A Family Tradition for the Thiels 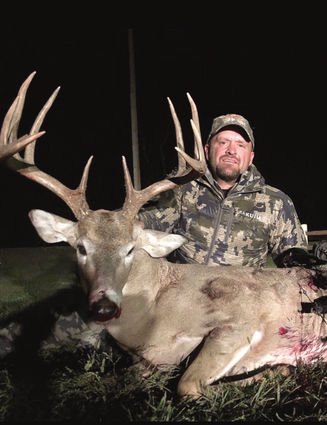 Chuck Thiel with the whitetail deer he shot by Savage. (Photos submitted)

Chuck Thiel comes from a long line of hound hunters. His family has been raising and hunting with hound dogs for over 80 years!

"My dad was a hound guy, and so was my grandpa and great-grandpa," stated Chuck Thiel.

Thiel carried on the hound hunting tradition and still actively hound hunts with his family, but his passion for hunting encouraged him to seek out other hunting avenues at a young age. "I have been hunting my whole life. My dad kind of got me into it, but I took off at a young age and went hunting for all different kinds of animals."

Chuck has hunted in many different states, including parts of Wyoming, Montana, North Dakota, Idaho, and even Canada. He has hunted a variety of animals such as moose, elk, deer, antelope, bears, mountain lions, bobcats, coyotes, and raccoons. "My favorite thing to hunt would probably be bobcats, but mountain lions are pretty fun to hunt, I run both of them with my hound dogs. I also really enjoy bow hunting whitetail deer; those would be among my top favorites," added Chuck.

Chuck is a very active bowhunter. "As far as bowhunting goes, I am pretty big into it. This year I am looking to shoot either a whitetail or mule deer buck with my bow, and I will also bowhunt an antelope pretty soon," said Chuck.

In addition to bowhunting, Chuck also likes to hunt pheasants with his Labrador Retrievers, trap, rifle hunt, and of course, hunt with his hounds, but he says that his family is what makes hunting fun. "There has not been an animal that I have harvested that my wife and my kids haven't been there with me (for years). My whole family was with me when I killed my mountain goat. It was a good time just because everyone was there and we had to hunt pretty hard for it," stated Chuck.

Chuck's wife, Jesi, has been just as active as Thiel when it comes to hunting. "Our family does it all together, my wife included, she is a hardcore hunter! A couple of years ago, my wife killed a monster mountain lion, and that was awesome, I mean I have treed hundreds of lions, but that one was the biggest one that I have ever seen," said Chuck

Both of Thiel's sons, Sterling and Sawyer, are also big into hunting. "One of my sons killed a giant whitetail in 2019."

Last year, Chuck was particularly excited because he got the opportunity to fill a tag-of-a-lifetime with his son, Sawyer. Chuck said, "My son and I drew two bull tags up at the lake last year, and it was kind of neat because I have put in for 30 some years to draw that tag, and my son drew one the same year I did!"

When Chuck was asked what his favorite part about hunting is, he explained, "Just the fact that I get to have fun with my family. As long as my family is involved and having a good time, it makes it worthwhile." 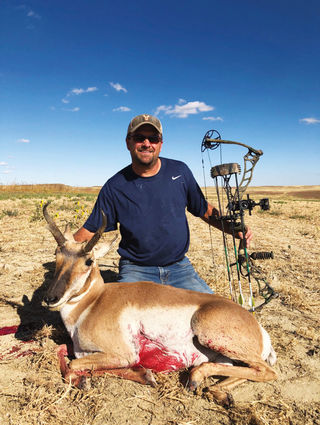 Chuck Thiel with the antelope he shot by Savage.

Hunting is a "several generation thing" in the Thiel family, and they plan to carry on the tradition of hunting for many more generations.